Getting the trailer sorted meant that Project 2CV could move on a step. Yes, it was time to separate chassis and body! This is always a huge moment, and I was feeling a certain amount of nostalgia. It is now 13.5 years since I did this job, on this car, the previous time. 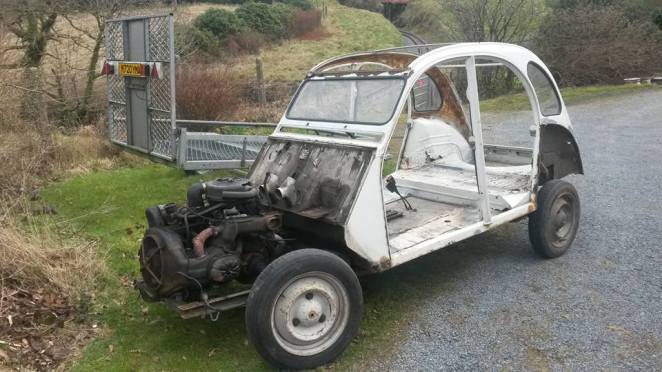 Unbolted body, ready to lift off.

Now I must say, I definitely married the right woman, as Rachel was full of enthusiasm for this bit. With just two of us, it wouldn’t be easy, but we managed it. I reckon I’d lose to Rachel in an arm wrestle, and her muscle was certainly appreciated.

Of course, the body didn’t actually fit on the trailer, because I never measure things, but with the tailgate removed, all is well. Not like I’ll be rolling it off is it?

The body is ready to be shipped off.

It was hard work, but we got there! It’s not like we had to be careful to avoid damaging it after all. I will be strapping it down before I set off. Don’t worry.

Now I had a rolling chassis to deal with, and wanting my garage back for the Dyane, we decided to return the chassis to a local friend’s garage – where the 2CV had been hibernating since last summer. I did consider driving it there…

…but decided for trusty wife power. We bolted the rear bumper back on for this. Rachel is sadly not unaccustomed to this position, on account of the number of times I’ve got stuck in mud, off-road or in snow.

Manual labour. I did push as well. Honest.

So, the 2CV is in pieces, now spread out over several locations. On Monday, I’ll be driving up to Bradford to visit Citwins, where Alan Rogers can size things up, suck his teeth and tell me what the damage will be. That 2CV fund is going to vanish very quickly! We both reckon it’ll need over £1000 of panels, but your money is making that a realistic prospect. I’ve added a bit into the fund myself, which currently stands at just over £1700. It’s ruddy marvellous that quite so much is available for 2CVs!

That concludes this update. Progress has been pleasingly swift and I thank all those who’ve contributed for making it happen. Enthusiasm is high once again!

With wife power, anything is possible! Almost. We did need a Land Rover…