I can’t do much with Project 2CV at the moment – Monday is the next time anything will happen. I thought I’d give a bit more background to what I’ve got up to with this car. We’ve had far too many adventures to list here, but this is some of what we’ve done together.

Let’s start in 2004. I was working for NFU Mutual at the time, being paid far too much money for what amounted to little more than admin. Welcome to the expensive world of IT. My daily commute took me from the delightful village of Byfield, Northants to Stratford-upon-Avon, and NFU Mutual’s large office building. The job paid well enough for us to buy a new front door. But how to transport it?

Elly hard at work, transporting a door back in 2004.

It must be said, this commute route was an absolute joy. I barely saw any traffic, and could cover the 25 miles to work in just over 30 minutes on a good day. That’s an average speed of 45mph. In a 2CV with 29bhp! I was hurtling through some very pretty scenery, with plenty of bends to contend with, and arriving at work very happy indeed. To put that into perspective, I’d previously been living in Birmingham, commuting from one side to the other and taking 45 minutes to travel just 12 miles. The scenery was definitely not as good either.

There were other adventures too, such as driving to France, Belgium and Scotland in 2005. That was my first overseas foray in the 2CV, and I thoroughly enjoyed it. It was also the first time I’d taken a 2CV to Scotland for at least seven years. The reason for Scotland was the thoroughly epic (and muddy) World Meeting of 2CV Friends in Kelso, Scottish borders. An exhausting but thrilling few days, though at one point, the need for dryness and warmth was so strong that we went and stayed in a B&B for the night… 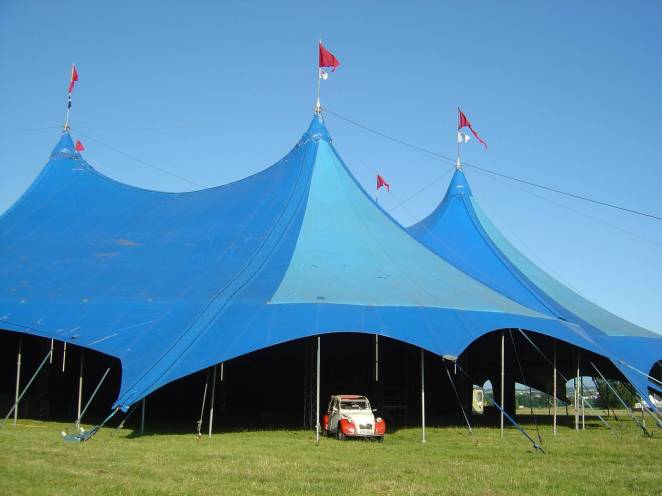 A few years later, after the second part of the restoration, Elly the 2CV got to drive right around the perimeter of Scotland as part of the Eight Ball Rally – well, all around the mainland GB in fact. By now, I was working as a writer for Classic Car Weekly, and living in Cambridgeshire. Turns out 2CVs are absolutely ideal for the bumpy roads of The Fens. I was still enjoying my commute.

2010 was the big adventure though, and I’ve talked about it before because it still excites me to look back at it. Taking the 2CV to Switzerland remains one of my most favourite adventures. It was certainly a lot more comfortable and enjoyable than taking an H van to Sweden in 2007 – the most annoying aspect of which was not taking Elly to Sweden and Norway when I had the opportunity.

Elly rests in the most scenic multi-storey car park in the world. Saas-Fee in Switzerland.

After we moved to Wales in 2010, circumstances dictated an end to such adventures and Elly’s annual mileage dropped to 3000, or even lower. It had been typically 5000-10,000 a year. I think the amount of time she then spent parked up, not being used has only made the rot issue worse. I work from home, so can go several days without driving a car at all. Then, when I do go for a drive, I generally have a choice of shambolic vehicles to pick. The mileage did start going up a bit after we sold our Mini, as the 2CV became the default choice of vehicle for Rachel – she doesn’t like fancy gadgets like power steering and electric windows. The 2CV is perfect. Leaving the 2CV sitting around in the soggy Welsh climate really wasn’t doing it any favours though.

Not that we haven’t had fun since moving here! After all, there are greenlanes to explore…

Elly takes to the greenlanes of Wales in 2011 – on this very day five years ago in fact.

In fact, you can watch a video of that adventure below. We’ve certainly had some fun together over the years. I’m looking forward to many more.