Yes, the day is here at last. Retro Japanese magazine is now available to buy. I find this massively exciting. Putting the title together was a simply joyous experience, thanks to my combined love of Japanese tin and the retro era – typically 1980s and 1990s.

Sure, there’s some content featuring cars prior to this, such as the test drive of a Honda Civic Mk1 Hondamatic, but generally, the title focusses on the cars I remember very clearly from my childhood. Which is a reminder that when it comes to classic cars, nostalgia is one of the key reasons to get involved. 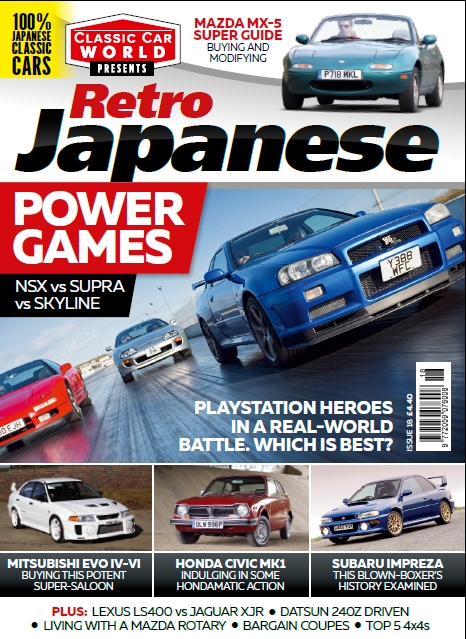 Retro Japanese magazine is on sale right now! Video below.

Now, look at the front cover, and you might assume there’s a focus on sporty stuff. That emphatically isn’t the case though, I’ve simply picked the cover stars that I think are most iconic. The content of the magazine itself is rather more varied. In the pages of Retro Japanese magazine, you’ll find Nissan Bluebirds, Toyota Carina Es, Honda Accords battling for space with such variedbeasts as the Isuzu Piazza and VehiCROSS, Nissan Patrol, Honda NSX and Subaru Impreza.

I even managed to find a picture of a Nissan EBRO van, remember those? It came courtesy of SpottedLaurel on FlickR. He’s got over 11,000 photos if you fancy losing yourself for a few hours.

It was a right walk through memory lane for me, and all the more enjoyable because of that fact. As well as editing, I did a whole heap of writing and research and found it thoroughly fascinating, even if it isn’t always the easiest research topic. When it came to writing about Nissan’s Spanish operations, even Nissan’s own websites seemed to contradict themselves! That was part of a feature called Far East Invasion, where I looked at how Japan brought its efficient production techniques to Britain and wider Europe.

There’s also a super guide on the Mazda MX-5, which looks at buying, deciphering the baffling range of Mk1 and Mk2 options, and then tells you how to modify your steed if you so wish. Supercharging looks fun for a start.

Anyway, thanks to Kelsey Media for this opportunity, and thanks to those who helped along the way. I hope you enjoy the magazine – please do let me know what you think. Finally, here’s a video  of the cover stars in action. Best day at work ever?