Since I bought the XM, and presumably long before, it has had a sunroof leak. I checked the drains weren’t clogged – they weren’t – and then noticed that the water appeared to be coming through the glass! How was that possible?!

Turns out that the frame the glass is bonded too often corrodes on XMs. This both breaks the bonding between the glass/metal, and pushes out the main seal. Now that seal isn’t designed to stop water coming through the hole – that’s why there are drains – but it IS meant to stop water coming through the glass. When it starts bulging up, water gets in and then passes through where the bonding has failed. This is what’s known as a pain in the arse.

I tried taping over the sunroof but capillary action allowed water to seep in regardless – and the tape then prevented the seal from ever drying out. So, I was forced to seek a replacement glass/frame. I removed the sodden headlining so it could dry out, and I could also reattach the cloth that had started to sag after the moisture washed away the glue. The plan was then to replace the entire mechanism. 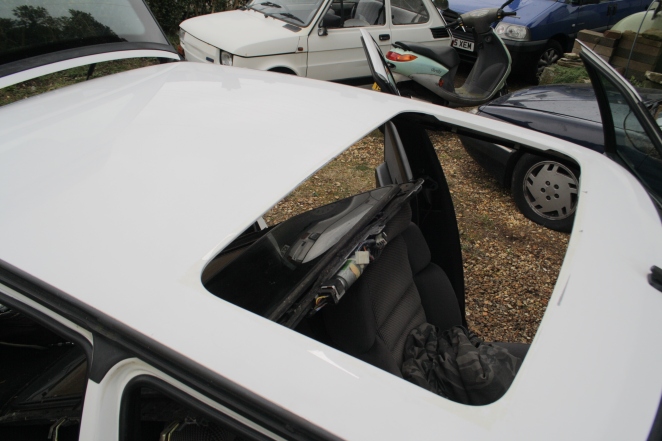 As it happens, I immediately drove the XM to a Citroen specialist for timing belt renewal, so it’ll be sometime until I can tell whether this refit has been successful. Certainly it’s true that the new frame is in much better condition! I should have the car back next weekend. Place bets now for how long it’ll take me to get around to refitting the headlining…

I am still liking this car though. It’s not too joyous around town, due to the heavy clutch and tired spheres, but it just lopes along on fast country roads so well. That’s why I own this car. So, spheres are next on the hit list, and I may have to do something about the clutch too. They can last a long time in XUD diesels, so it may even be the original. Tight budget prevents me from getting too much done in one go, but I am steadily improving this car! It astonishes me how much more I like it than the BX, of which I’ve long been a fan.