Oh dear. I’m way off the pace on Blog posts again. Sorry. Crazy summer. I’ve also been very busy trying to get the bloomin’ Bluebird working. Not without success! Keep up with that and other stuff at my YouTube channel.

But, you’re getting this fleet update very nearly live. You see, when I woke up this morning, I didn’t own a Proton, but now I do! Fed up with people telling me I should buy it, after it was spotted on the internet, I went and bought it. No collection capers really, because it was about half an hour away from home. Naturally, we took the Perodua, another Malaysian motor car, in order to ‘just take a look.’ Having been offered it for scrap value, frankly it was going to have to be pretty bad for me to decline, but it helps to have the right frame of mind. 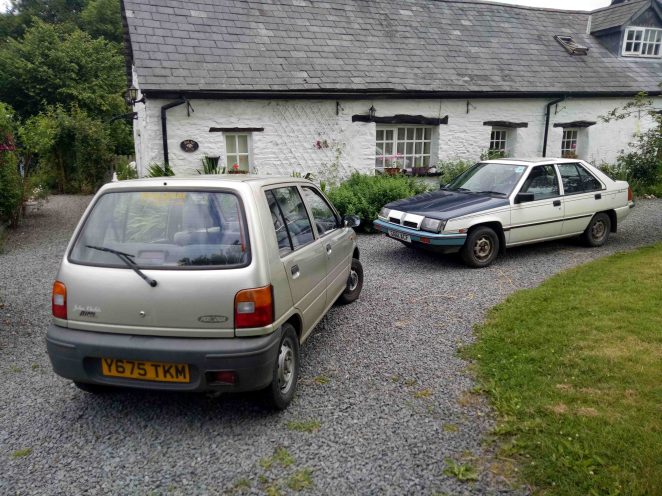 Two fine products of Malaysia meet for the first time.

Sure, it was hardly the best example, but then it was £50. With two days of MOT. It had been in the same family’s ownership from new, had fewer than 90,000 miles on the clock and had apparently had a head gasket replacement not all that long ago. Sure enough, I didn’t say no, though I did have a quick test drive first. The seller explained that the brakes were iffy, and needed work for the MOT, but they seemed ok albeit a bit wooden. A tiny amount of money was handed over, and off we drove in our Malaysian convoy.

Proton was the first car manufacturer in Malaysia, in a joint-project with Mitsubishi. Which is why the Proton looks like a Mitsubishi. The Aeroback was unique to Malaysia though – it’s related to the shorter Colt hatchback I owned last summer, where as the saloon was just a Malaysian-built Lancer. Interestingly, if you’re me, there was even a limousine version!

UK imports started in March 1989, with the Proton going down an absolute storm. The importers apparently sold 12 months of cars in just six months. My new Aeroback GLS was sold in April 1990, making it fairly early. The GLS meant you got a UK-fitted Webasto wind-back sunroof and TWIN door pockets. Heady stuff. The sunroof apparently leaks, but that’s ok, because the local garage “fixed” it… 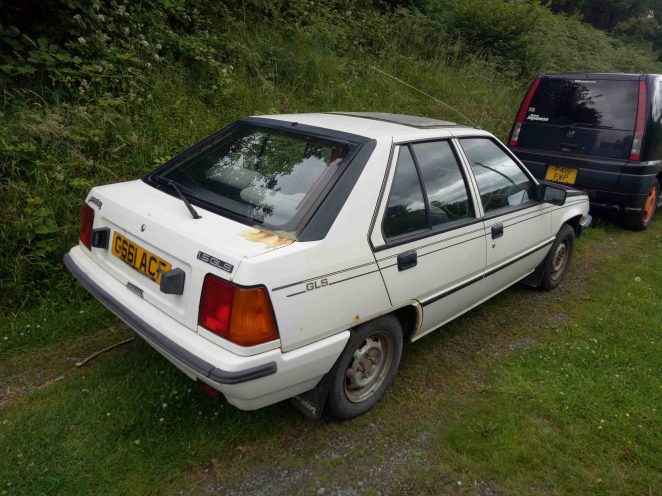 A sheet of plastic has just been taped over it. It does indeed work, but I like a working sunroof, so will see if it’s possible to repair it. Do Webasto still sell seals for them? We’ll find out…

The smart GLS wheel trims are missing, but I can’t say that’s stressing me all that much given the front bumper and bonnet are the wrong colour.

With the deed done, we then drove home. After some miles, the brakes were getting noisy and, sure enough, the nearside front caliper is binding. Not very surprising given I’d been told there was a problem with the brakes.

Inside, it’s a sea of grey which reminds me very much of the Colt. 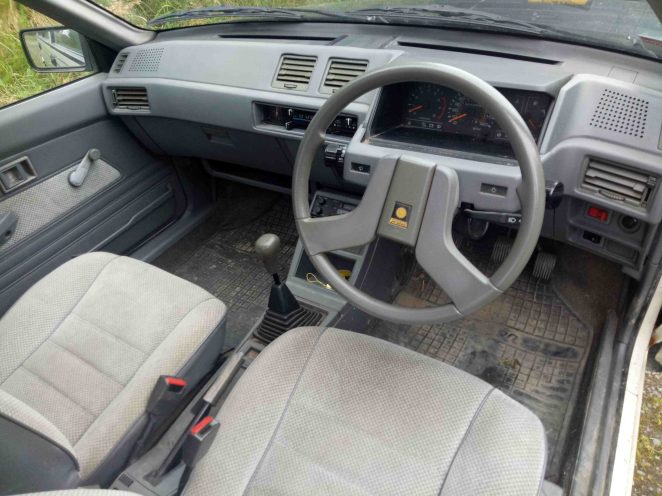 The temperature gauge reads permanently OVERHEAT, whether the ignition is on or off. There really isn’t a lot else to go wrong though. Equipment levels are minimal. I like that. Well, apart from the fact that the driver’s window glass tries to fall off the runners when you wind it up. That isn’t ideal.

So, the Proton will now be awaiting its turn in the queue. I’m hoping to get the Bluebird on the road and MOTd in the next couple of weeks, then I’ll start investigating what’s up with the brakes. I think being Mitsubishi-based (rather than the Daihatsu-base of Malaysia’s second car company, Perodua), I stand a better chance of finding correct parts.

I must say though, this is a rather jolly car to drive. It ambles along very merrily, and is a good steer too, even if it does start rolling about and threatens to understeer if you get too silly with it. As a car to simply jump in and drive, it’s exactly what most people want, which is why they became so remarkably successful. It isn’t thrilling, it isn’t fancy, it’s just very competent. I like that.