Well, that’s not entirely true. There has been progress. It just doesn’t feel like it.

Mostly, today has involved putting the engine back together. I decided the cam timing was fine, so set the rocker gaps, refitted the distributor, reassembled the timing cover and set about the truly horrendous business of reattaching the inlet manifold. The bolts would be a lot easier to access if someone hadn’t put an inlet manifold in the way. I was sweating buckets, and as I shed moisture, I decided it’d be a good idea for the engine to do likewise. So, I drained the creamy oil out of it and lobbed in some 30 grade stuff I had kicking about, watered down with some 5w30. It won’t be in there long. It’s effectively a flush. There may also have been tea.

I then set about refitting the HT leads, though leads 1 and 2 are very similar lengths, making it hard to know which way around they should go. I cleverly marked them at the dizzy cap end, but had to refer to the manual to work out the firing order. It was time to get brave and actually operate The Starter Motor.

The resulting noise was slightly curious, but nonetheless, the engine seemed to spin merrily. I had already spun it over by hand a good few times, to ensure it would actually turn over without going CLANK. But, the battery was clearly rather low, so assistance was sought. 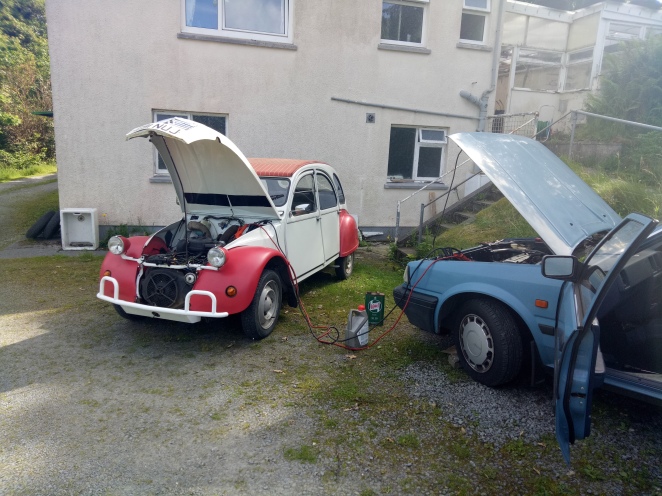 I now reconnected the coil king lead, and prepared myself for the truly exciting moment. Actually starting the engine! Only it wouldn’t start. Reasoning that the carb bowls were probably empty after several weeks of being open to the elements (well, air at least), I sloshed a little fuel into the carb and tried again.

It caught, blue smoke poured from the exhaust, but that’s fine – I deliberately left a little oil in the bores when the head was off. It screeched. Er, that’s not meant to happen! It stumbled. It generally sounded like it was running on two cylinders. I turned it off, swapped the two suspect HT leads and it was even worse. I was right the first time! But, it still screeches (stops when you apply throttle) and will not run on all cylinders.

I’ve since discovered that the pipe from the PCV (positive crankcase ventilation) valve was split. In fact, I then discovered there was a bodged bit of plastic pipe that was missing. Could that explain the screech? It’s either that or I’ve got a very slight leak on the inlet manifold, and that’s a horror too terrible to contemplate. I do not want to take the sodding thing off again.

At this stage, I completely ran out of time and had to go out to a meeting. Even worse, I had to take minutes, which I need to write up. Instead, I’m writing this. I’m now away for a few days, then seriously busy with work, so have no idea when I’ll get this sodding car sorted out.

This year is not working out very well on the car purchase front.

2 thoughts on “Project Bluebird: Not progress”