During the 2CV’s rebuild, most mechanical items were considered off-limits. The focus was to get the car back on the road, and as it was running fine when it came off the road, I was hoping not to have to do much. After putting the body back on, I had to refit the brake master cylinder. As that had been off, I then had to bleed the system. This is where problems started, as the nearside rear bleed nipple made it apparent that it wasn’t for moving. It was the iron oxide. The poor nipple had lost its cover, and Welsh weather had caused it to rust. I decided not to fight with it, as the last thing I wanted to do was render the brake system inoperable. Instead, I reasoned that in all likeliness, very little air would have got into the line, and I could get rid of any fresh air via the other nipple. In this, amazingly, I was proved correct. A lot of air came out – trapped between the old fluid and the new stuff in the refitted master cylinder. The brakes passed muster for the MOT.

Obviously, this wasn’t a situation I was happy to live with. I would far rather have a fully bled brake system. So, the other day, I had a go at freeing of the nipple. It snapped off in response. So, today, I booked in with Sparrow Automotive for some very necessary overhaul work. You see, the problem is, you need a 44mm socket to remove a 2CV rear brake drum and bearing. You also need a whopping 250-290lb/ft of torque to undo it. That’s ten times what the 2CV’s engine can produce! I have neither of these requirements, so a visit to Sparrow was in order. I had to get up horribly early for this, though as it happens, George the cat decided to wake us up ten minutes before my 7am alarm… About an hour later, I was here. 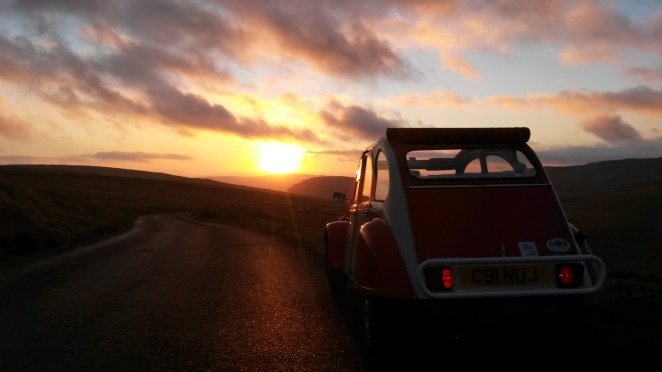 Yes, roof back on the Elan Valley Mountain road, enjoying the sunrise. Gosh, sometimes it really does feel good to be alive! I’d wrapped up well, and it wasn’t that cold, so I thought I’d leave the roof off.

Some miles later, that plan changed.

I’d started to see frost at the side of the road as I neared the border, and then it turned foggy. Suddenly, I found myself rather suffering from excessive cold air. Time to stop and put the roof back on. It was so cold that the straps that hold the roof back had shrunk! I couldn’t get them to fit in their ‘rest’ position. I was certainly justified in keeping the grille muff on. The heater was working well and I soon defrosted. 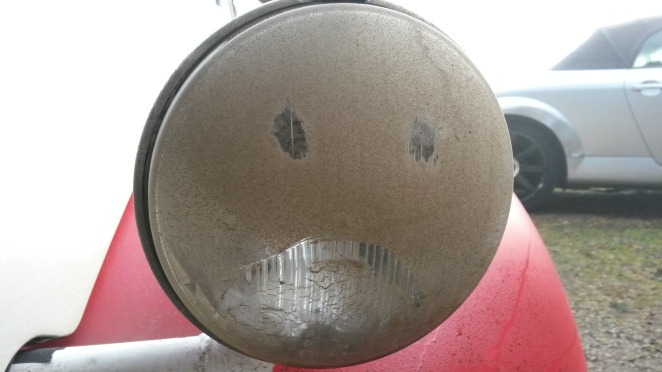 What a mucky drive!

There were other issues though. I got through so much screenwash. At times, I seemed to be pressing the squeezy-button with my thumb almost constantly. Headlamp performance was certainly rather worse by the time I arrived in Hereford.

Time to crack on, as Elly was squeezed into the workshop along with some custom vehicles of the type Sparrow Automotive rather excels at.

A BMW-bike engine installation, and a hot rod 2CV. Ace!

Work began and, with the benefit of air tools, the hub nut (ahem) was soon removed, and the wheel cylinder replaced with a fresh one – that didn’t have a broken nipple in it. 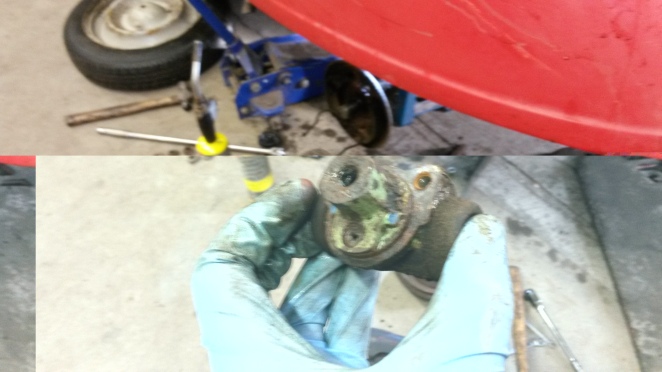 At this stage, we discovered that the pivots for the shoes were in a pretty poor state. One clue to this was the rather firm brake pedal. The pivots often seize up but, because the rear brakes do still operate, 2CVs can often pass an MOT test even when the brakes are not doing much stopping! Another clue for me is when I went hooning last Saturday. After a particularly long descent, the front brakes started groaning. That’s a sign that they’ve been working hard. Given I hadn’t been braking that hard, it suggested they were doing most of the stopping. So, everything was stripped and cleaned up.

Oddly, the 2CV appeared to be wearing a mis-matched set of shoes. It’s years since I last had a peek at the rear brakes (due to that nut issue), so I’d taken the liberty of bringing a fresh set of shoes that had come to me in a rather large collection of 2CV bits. Well, they might as well be fitted now we’re here. The only problem was that the four adjusters (one for each shoe) were very seized. Three responded to smacks with a hammer and a dose of penetrating oil, but one just wanted to round. There was only one thing to do. Deploy a Joey!

Joey is the very-talented friend who welded up Elly’s front wings. She’s darned good at what she does, and far safer with an angle grinder than I am. In other words, she only cuts what actually needs cutting…

A new adjuster from Dutch 2CV specialists Burton was fitted, then the new shoes and, finally, a pair of brand spanking new hub nuts. Now, the brake system could be bled properly at last.

Oh what a difference! Now, the brake pedal travels much more. In fact, Pete Sparrow told me that customers often complain that the brakes feel worse after he’s sorted them out, because they’re not used to the pedal actually travelling! The shoes still need to be bedded in, so I haven’t been pushing the brakes hard, but the car now squats much more evenly when I brake, without the comedic nose-down stance it had previously had. If you own a 2CV, I certainly recommend that you make sure the rear brakes are working properly. You might not know just how bad they actually are!

With the work done, I could then set about the 1.5-hour drive back home.

A filthy Elly pauses on the way home.