My life, for the past six years, has been rather relaxed in terms of working hours. I’ve worked when I’ve felt like it, and not worked when there was something better to do. It’s been grand to be honest.

However, I find myself increasingly busy these days, with lots of writing and editing work. This is good! But, the flipside is that I’m having to get a bit more disciplined about working. It makes sense to broadly follow normal working hours, as that’s what most of the people (colleagues, specialists etc) do. It’s no good me being raring to go on writing a feature at 11pm on a Sunday night, as I can’t get hold of the people I need to speak to. As it happens, I was finishing off a feature for MG Enthusiast at 11pm last night, but I’ll try to ignore that for the sake of narrative.

What I’ve drifted away from is the original point. I’m starting to rediscover weekends again! Work levels have reached the point where I need dedicated time off. It’s quite novel.

On Saturday, Rachel was out but the sun was shining. It was time to get Elly’s roof off and go for a drive. So I did.

A rather lovely Saturday.

I had a good hoon around the mountains, then ate my lunch on the beach at Clarach – with the front passenger seat making a handy deckchair. It was fanastic – so enjoyable I made another video.

Sunday dawned with rather less sunshine. I say dawned – it was Sunday, so we didn’t get out of bed until gone 10am. And to think. People sometimes ask us if we’d like children. Ha!

For reasons that aren’t entirely clear, we decided to head to Pembrokeshire. It’s not a part of the country we’ve really explored before, which was reason enough. Having already clocked up 300 miles in the 2CV within a week, and with rain looking a possibility, we elected to take the ZX instead.

Oh how lovely it is! Compared to the frantic nature of a 2CV, the slow-slogging power of the ZX’s 68bhp XUD diesel engine is a complete contrast. Furthermore, it’s smooth ride is a complete contrast to the MG GS and Nissan Qashqai I’ve been mucking about with recently. How did manufacturers forget how to make cars ride and handle this well?

The good handling is essential, as the engine isn’t really powerful enough for you to consider slowing down desirable. Much like a 2CV. We pushed on down the A487 coast road, marvelling at the scenery as the cloud lifted and sunshine peeked through. Though it was miserable again by the time we reached Fishguard. 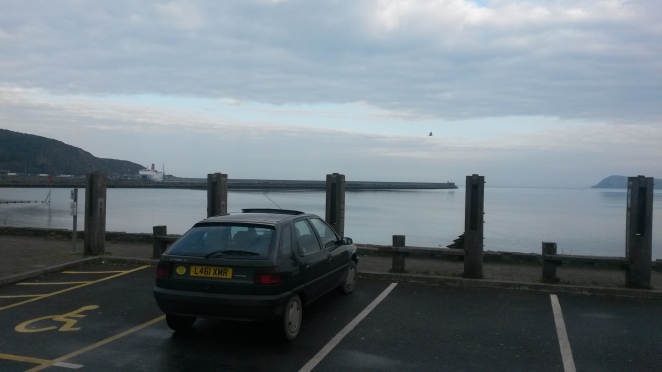 We lovingly watched the ferry clag up over lunch, before it departed to Ireland. Then it rained quite a lot, so we drove away. Not before we’d found an Iron Age fort to have a mooch at, and a lovely old chapel.

ZX poses outside a rather old, and lovely, chapel.

Then we pushed on home, via a brief stop at Aberaeron. The ZX lapped up the miles, though the squeak of the rear wiper blade reminds me that I must change it at some point. The engine was struggling for fuel at times too, or at least, that’s what it felt like. This is a reminder that I really must give the poor thing a service at some point. I suspect a clogged fuel filter.

Overall though, what a lovely weekend. It certainly set me up nicely for the working week ahead. I’ve had a really busy day!