Now with video! (scroll down)

I’m quite rubbish at buying cars. I was going to buy a Lexus, but somehow ended up with a Mitsubishi Colt 1500 GLX automatic. This was clearly not going to be the ideal vehicle for our upcoming holiday to France, so panic measures were resorted to.

That meant heading to Ebay to see what was actually suitable for such a trip, and what was cheap. The Rover 600 was an obvious contender, the purchase of which I’ve already covered. Now, it was time to find out how it would do on the trip.

Firstly, I decided to investigate the air conditioning. It wasn’t working, and a heatwave was forecast. I decided to ask my local garage to investigate, and they found a failed hose. There was no time to source a new one, but they reckoned a local agricultural firm could make a new hose with the existing connectors. All was going well until, the night before we were due to depart, the new hose blew apart. One of the connectors had not been sufficiently crimped. This was especially annoying as I’d actually dug my bicycle out of the storeroom and ridden it 4.6 miles to collect the car! The hose was swiftly removed and the garage offered to try and get it remade the next morning. I decided to take the gamble, even though that meant collecting the car on the day we were due to leave.

The day of departure arrived and I got to the garage just as the new hose had been fitted. It was time to fire it up! Thankfully, the new hose held, and beautifully chilled air came out of the vents (after I’d previously fixed the blower motor). Fantastic! I said my thanks, drove back home, we loaded the car and headed off to our overnight stop in Sussex.

It was already pretty sweltering, so I was glad of the air con. It truly transforms a motorway journey in the summer, because you can keep the windows up. That makes it much, much more peaceful. We even managed to listen to music at a reasonable volume. Perfect.

However, our joy was not to last. During the latter stages of our trek along the M4, I began to notice that horrible hot-electric smell that suggests all is not well. It reminds me of model railways, when dirt is making it difficult for the voltage to get through to the wheels. Sure enough, when we hit traffic on the M25, it became apparent that the fan was not actually spinning – the cool air had merely been a result of the ram air effect of travelling at speed – or perhaps that ram air had been helping the fan to spin. Either way, it was back to windows down.

I did briefly consider trying to strip the motor out at my sister-in-law’s house, but decided eating dinner was a better idea. I also didn’t fancy having a car in bits hours before our chunnel crossing. Noisy windows it was then – at least it was cool on the eurotunnel train!

We then had several hours of French autoroutes to contend with, and it was noisy going. Until I decided to just run the air con with the ram air effect. At 130kmh, this worked very well and we were kept at a comfortable temperature. It only fell down whenever we stopped.

There followed a few days of family, too much delicious food and much sitting around before I got a chance to get the fan motor out.

Removing the fan quickly revealed that all was not well. It was reluctant to turn and indeed, was refusing to do so entirely without a little assistance. I recruited my father-in-law to investigate, as I knew he’d enjoy the project. With the motor apart, we could see the problem pretty clearly.

Trying to revive the motor with a clean-up.

That’s some pretty drastic wear on the commutator. That step at the end of the brush should not be there. The brushes too were pretty worn. We were hardly going to find replacements in the middle of rural France on a Sunday afternoon, so a bottle of meths was provided, and we settled for just cleaning things up as much as possible. That included using a cocktail stick to clean out the carbon muck between each of those segments to reduce the possibility of short circuit. The brushes act on each of those segments in turn. I also cleaned out the nose bearing and the guides the brushes sit in, to ensure they could move freely.

With that done, I then reassembled the motor and a bit of machine oil was added to the nose bearing. With some scepticism, I plugged the motor back into the car’s loom and prepared to turn it on. Well, I was glad I’d got a firm grip of the motor housing, as the difference was staggering! It had gone from a lumpy, reluctant rotation to generating so much torque that it threatened to rip itself from my grasp! I looked all dramatic as the huge movement of air blew my hair backwards. This was a proper little wind machine.

Now all I had to do was reassemble everything, which I did with only one screw remaining. I’m clearly getting better at this lark. The next day, we went sight-seeing and enjoyed beautiful air conditioning once again. Lovely!

Of course, it didn’t last. The next day was even hotter, and having left the car parked all day, I moved it to a better position for loading up, prior to our long drive home. I turned on the air con, but the vents resolutely refused to chuck out air that was very cool. Sadly, that continued for our drive home. The pump was kicking in, but the air conditioning unit merely made a wheezing sort of a noise and no cold was forthcoming. Bother!

Things got even worse at the Eurotunnel entrance, where British security checks were causing a major hold up. We queued for ages, at the hottest part of the day, with not a cloud to be seen. 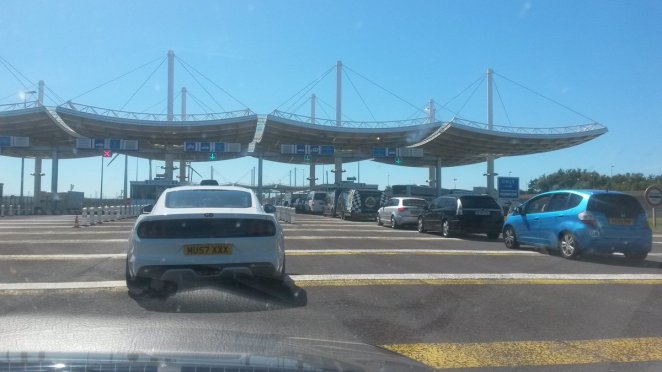 It was pretty much unbearable, though things improved when we opened both front doors. There was hardly a breath of wind though. Seriously sticky. At least the train was a little cooler, and it was also a fair chunk less scalding in Dover too. Phew. It got a lot hotter soon enough though, with the M25 being pretty bad. I knew there was a weather front heading along the M4 though. If we kept going, perhaps we could meet it!

Having refuelled 45 minutes from Calais, I certainly didn’t need to stop for fuel, but we eventually reached Cricklade in Gloucestershire, where it was decided that tea was most definitely needed. It had been 400 miles since our last brew! Seconds after we sat down, there was a power cut, but it was ok. We had tea. And possibly scones…

As we headed towards Wales, things became cooler still. We eventually arrived home at just after ten pm, having covered well over 500 miles that day, and some 1200 miles in total.

And here’s the thing. While the air conditioning certainly played up, the rest of the car just did what a car should. I drove it at 70-80mph (80mph=130kmh on the Frenchside) for hour after hour. It had to queue in major jams (Calais and M25). It never overheated, it never needed a drop of fluid. It was all quite boring really. In fact, if it weren’t for the air con related woes, it would have been a thoroughly boring experience that would hardly have been worth writing about. It just proves that £230 really can buy you an entirely capable vehicle. I still reckon it looks superb too. It may not be a Lexus, but it might just be the best value car I’ve ever bought.

Resting in the heat at the French services. What a car!