It really has dawned on me lately that I have a severe dislike of camping. I think because of the sleep aspect. It rarely seems to go well.

That’s not to say every camping experience I’ve ever had has been bad, I’ve had some truly magnificent experiences – most often in my tiny Eurohike two-man tent. Amazingly, this little thing first saw use at Glastonbury in 1999, and has since kept me cosy during snowy nights in Scotland, as well as on foreign jaunts to France and plenty of other places in between. For a quick night’s kip somewhere, it’s still ideal.

Last year’s experiment with a CombiCamp trailer tent was interesting. It was certainly delightfully easy to erect and pack away, which is a large part of the appeal after years of tent wrestling. It was never entirely comfortable though, and wasn’t entirely capable of keeping the weather outside – though it didn’t help that the first time we slept in it ended up being in quite a storm! It at least proved that it wouldn’t blow away…

Rachel found it good because, unlike me, she has curves and doesn’t find it comfy sleeping on a flat surface. We’ve tried all manner of airbeds and self-inflating mats, and the conclusion is that they’re rubbish. I can just about get by on a self-inflating mat, but airbeds just frustrate me.

There’s a lot to be said for a bed that isn’t on the floor too. On the downside, the CombiCamp was quite elderly and not in the best of shape. I thought it best to sell while there was still something to sell.

Now we’re approaching another season, and tents are not looking like the answer. Especially while we’ve got the luxury of a rather decent tow car! So, while the Dyane is up for sale and the 2CV is undergoing a rebuild, what better time to get a proper caravan?

Naturally, my budget is tiny. It always is. Can you get a decent caravan for a couple of hundred quid? Well, we don’t know yet. We’ll find out on Tuesday. You see, we have won one on Ebay for £222. It looks like this: 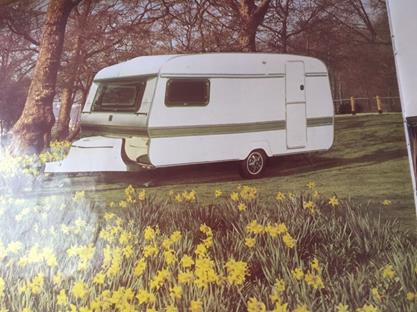 Or rather, it did look like that when it was constructed. In 1981. It’s a bit scruffier now, but the description is encouraging. It even has new tyres. It’s up in North Wales/Cheshire and I’m looking forward to discovering just what our feeble budget has bought us.

I’ve not done full-size caravanning before, so this’ll be an interesting experience. I have owned a caravan before though. 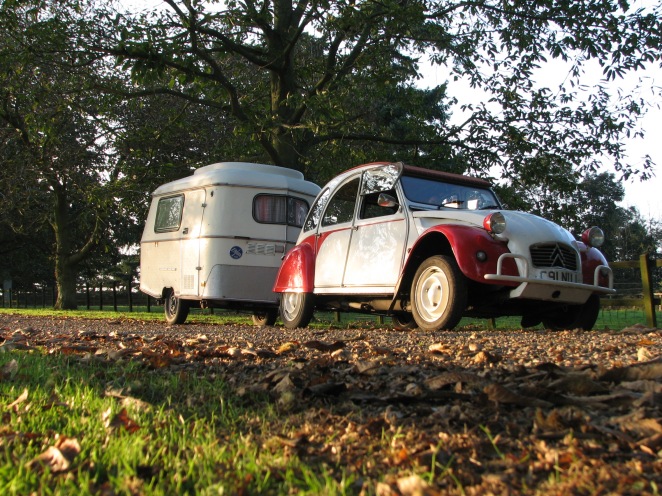 Puck ownership not without flaws.

That was an Eriba Puck that I once foolishly tried towing with my 2CV around the Peak District. It wasn’t much fun and was only the once. I did try a second time, but the 2CV outright refused and blew a tyre. We found the Puck horribly cramped too, so dragging a caravan to the site was painful, and it wasn’t exactly joyous when we got there. It wasn’t around for long.

Hopefully the XM will do a rather better job. With a maximum towing weight of 1500kgs, it really should do. It even has that torque stuff that’s so lacking from a 2CV’s repertoire. Whether the caravan feels worth it by the time we get to an event, who knows. Not that I can get too attached to it really. Hopefully at some point, the 2CV will be ready to ride again. And there’s no way she’s towing the new caravan. It weighs more than she does…

One thought on “I hate camping! Avec solution?”