Citroen and Austin were busy innovating in the late 1960s, with their displacer-based hydraulic suspension systems, front-wheel drive and increasingly radical styling. Against this, Ford opted for utterly conventional. The Cortina Mk3 was a gentle evolution of the Mk2. It was wider, but still rear-wheel drive, still with overhead valves (2-litre excepting) and still with a simple live rear axle – albeit now with coil springs. 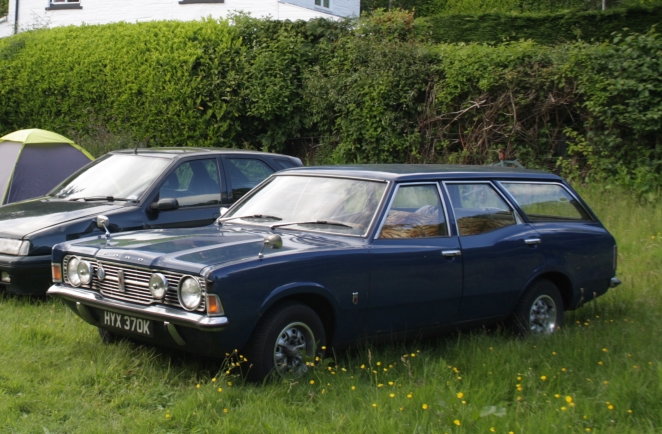 A beautiful load lugger for sure, if an unadventurous one.

But despite the dreary spec, Ford knew styling was important. With its clean snout and curvy rear wingline, the Cortina Mk3 is certainly a very attractive car, even in estate form. The extra width over the Mk2 meant it was very spacious inside, especially with the earlier dashboard, which curved away from the driver as it descended. It was a huge sales success – 1.1 million sold in just six years. During that time, the Pinto engine would replace the 1.6-litre Kent and trim levels would vary greatly. There was even a plush 2000E.

The car tested here is an early 2-litre L estate, dating from 1971 (but registered January 1972). That means it has more than enough power and torque for most. You certainly couldn’t call it sluggish. But what really impresses is just how pleasant this car is to drive. It feels planted and secure and the controls are all wonderfully light and accurate. That includes the gearbox, which is actually a five-speed Type 9 Sierra unit retro-fitted more recently. A cut-down gear lever gives a wonderfully precise change, and allows the Cortina to lope along at motorway speeds very comfortably.

I was also surprised at how good the road manners were. I wasn’t going to start hanging the tail out in someone else’s pride and joy, but I could certainly corner briskly and feel perfectly safe. The engine has good torque characteristics, so you don’t have to rev it hard to build up speed. It’s just really nice.

And that’s the key to the Cortina’s success. Sadly, Ford proved that a car could be thoroughly, almost mind-numbingly safe in engineering terms, but pleasant for anyone to drive. The case for greater complication was already starting to look weak, even in the 1970s. After all, here is a car that even over 40 years later, is still wonderfully competent. I drove the car after it had driven to West Wales from Bury St Edmunds. It proves just how usable classic cars can be. It also proves that while a lot of cold, hard facts formed part of this car’s conception rather than engineering or design flair, the end result is a car you can’t fail to like.