I asked ‘social media’ whether I should write about a Bentley MkVI Sports or another Ami, and democracy told me that another Citroen was the way to go. So, here’s my driving impressions on the Ami 8.

Far less quirky than the 2CV and Ami 6. All things are relative.

As I’ve already covered, the Ami was a major money-spinner for Citroen. A revamp was ordered in the late 1960s as as the Ami’s stylist – Flaminio Bertoni – had passed away in 1964, it was up to new boy Robert Opron to remodel this remarkable success story. He would go on to style the GS, SM and CX and there are hints of those, certainly the GS, in the new Ami 8 of 1969.

The controversial nose treatment was toned down and looked almost normal. Enough that British buyers became interested at last. At the rear, the reverse-rake window was abandoned, and a stylish fastback was now in place, with a vertical bootlid beneath its lower edge – just as on the GS. There were soon fancy options, like winding front windows on posh (later all) models, or individual, reclining seats. Disc front brakes were added mere months after production began too -a further benefit being that this system used the green LHM of the DS. A fluid which has a higher boiling point than conventional brake fluid, doesn’t absorb water and, most importantly, doesn’t encourage corrosion!

The engine remained the same 602cc M28 flat-twin as used in the last of the Ami 6s. This produces 32bhp DIN at 5750rpm. Otherwise, underpinnings remain refreshingly 2CV-like, with the same platform chassis, independent suspension and hilarious bodyroll. One change by the time this Ami was produced is that the suspension was no longer interconnected front to rear. 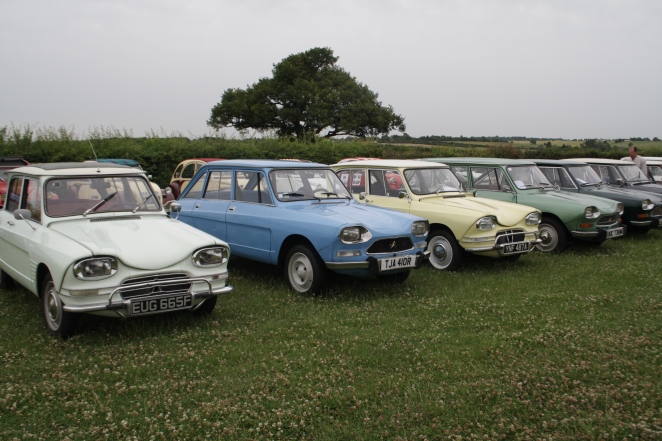 Blue Ami 8 between two sixes. Green one to the right is a rare Ami Super.

Remarkably, up until this very moment, I had never driven an Ami 8. It must be said, it felt incredibly refined compared to the 2CVs with which I’m far more familiar. Sure, that aircooled engine remains noisy, as does the transmission (especially in third in this example), but it’s far easier on the ear overall, and there is far less wind noise.

I mean really, it’s outright luxurious what with its reclining seats, proper dashboard and winding front windows. Of course, it doesn’t feel particularly quick, especially after you’ve jumped out of an XM turbo diesel, but you can follow the same 2CV principle of ‘maintain momentum at all costs’ with no bother at all. The owner, Richard Sadler, assures me it’ll sit comfortably at motorway speeds all day. I don’t doubt it. The handling is still superb, though the extra weight can cause even more comedic levels of bodyroll. Have faith. It will get you round that bend or at the very most, start gently pushing the nose wide.

The ride is truly magnificent, as you’d expect and I can’t say the lack of interconnection makes a huge difference behind the wheel. The overall comfort and practicality mean that this really is a very usable and very enjoyable motor car – if you can keep rust at bay. It makes me realise how wrong it is that these later Amis get overlooked for the super-quirky earlier ones. With the Euro weak and the French survival rate for Amis still strong, it might be just the time to nip over The Channel to buy one, just like this left-hand drive example. Tempting isn’t it?