There’s nothing like a lengthy road trip to really give you a feel for a car. What felt fine pottering around the lanes at home can come unstuck when it comes to covering distance. How did the Rover fare?

After clocking up nearly 300 miles yesterday, I’m in a fair position to comment. And the news certainly isn’t bad. I wasn’t crippled by backache after a five-hour drive (with short breaks) and the car didn’t put a foot wrong. Ok, so the suspension could perhaps be slightly more compliant, but it’s fine on motorways – just a bit uncomfortable on the hideous mess Kent seems to have for a road infrastructure. If this really is the Garden of England, then the roads seem to be crazy paving. 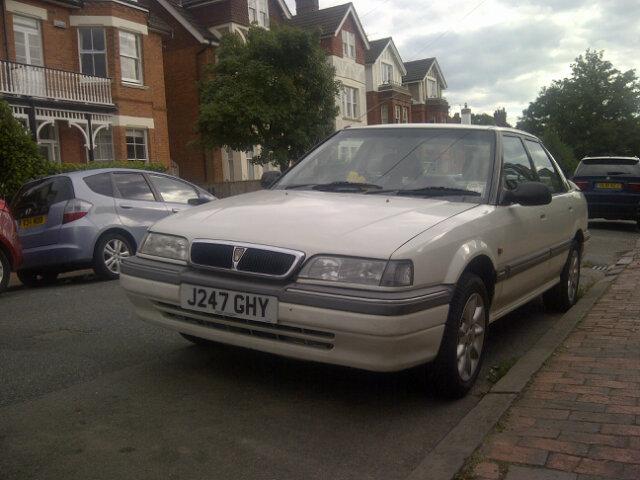 I do feel that this car has a lack of power though. It makes a lot of noise, but doesn’t really seem to want to accelerate. I’m not sure if I’m expecting too much of a 1.6, or whether the exhaust is clogged. It has a catalyst, so it could be a fault there. Pleasingly, it’s just early enough for me to entirely legally remove the catalyst. I might do just that.

The brakes are also poor, but that might be because I’m used to hydraulic Citroens and the surprisingly ferocious stoppers of the sadly-departed Sirion. Certainly there’s a nasty judder, so new discs may be in order. I suspect it’d feel a lot better for a fluid change too as the pedal feels horrible. I may well discover there are no rear shoes left too. I need to investigate.

While the gearing is a touch short – 70mph is a buzzy 3500rpm – it certainly sails along at motorway speeds well enough. The controls are nicely weighted so even when you’re really tired, driving it is no effort at all – though it can be tricky to potter smoothly around town. I seem to recall this was also a problem with our old ‘bubble’ 400 too. That was an absolute nightmare to drive in slow traffic.

Overall though, it’s hard to be that picky with a car that cost just £300. This truly is glorious cheap motoring. After another night down here in Kent, I’m off to visit The Midlands before heading to Rockingham Raceway for Retro Cars at The Rock. It’s a free show if you want to turn up, with the only cost being track time if you fancy it. I’m planning to put the Rover’s Uniroyal RainSport 3 tyres to the test by conducting a review of their grip levels on a skid pan. Should be fun! Or, if the tyres are really good, it’ll be no fun at all…