In the first part of this journey, I had travelled about 250 miles from home to Kent. I was in high spirits about the car and looking forward to the rest of the journey. The next stint saw me drive to Solihull. That meant another battle with the M25 so I left fairly early in the morning. This was a Bank Holiday after all. That strategy worked well and while the orbital was certainly busy, I barely had to drop out of fifth gear.

Once on the M40, things improved dramatically. As I was ahead of schedule, I took the unusual step of going into fuel-saving mode. A 60mph cruise. It certainly made a dramatic difference to noise levels. Instead of buzzing incessantly, the engine was near-silent. This was extremely relaxing. I may have even selected BBC Radio 3 on the wireless. I managed to avoid buying Werther’s Originals and a tartan blanket, but did go as far as to stop at a garden centre for a nice cup of tea. Sure beats the manic rush of the South East.

After a successful evening of beating a friend at Scrabble, it was then off to Northamptonshire. Again, I was in no rush and found myself heading towards Coventry – where there was a Transport Festival that very weekend. Once again, the smart phone came in handy and I was able to discover that there was a road run, that very day. It made sense to try and meet it, so off I went to rural Warwickshire, very close to a village I called home for several years.

A Swift, a Beetle, a Jag and a ropey old Rover

You can just spot the Rover in the background of this picture of a Swift – a little-known Coventry manufacturer that sadly left this world in 1931. Note excellent headgear. I was truly in seventh heaven here as all manner of wondrous machinery paraded past. Static shows do bore me. It’s so good to see even really old vehicles heading out for a drive. There were over 400 vehicles, but I sadly didn’t have time to watch them all – or listen to them. The Ferrari 250GT sounded glorious in exactly the way an F40 didn’t. Bentleys wafted past while Triumph Vitesses attempted to use sonorous decibels to hide their Herald origins.

I headed to Northamptonshire for a night with more friends and the utterly addictive world of Mythbusters. Oh and they let me drive their Citroen XM, which only made me want one even more. Certainly, it was more comfortable than the Rover, and far better over unsmooth roads. However, after a bright and breezy start the next day, it was to Rockingham Motor Speedway I headed, just 20 minutes away.

The weather was bloody appalling, but a few hardy souls still came out to play. The day was made up of static displays, tea-drinking and then, for those of a lively disposition, an introductory track session. I skipped this bit, but did opt for a session on the skid pan – primarily to test the Uniroyal RainSport 3 tyres I’d had the Rover equipped with. 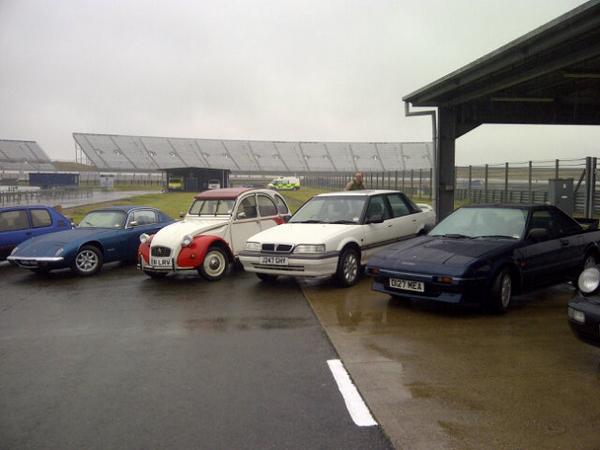 Sadly, no photos exist of my hilarious antics aboard the Rover, but much fun was had. The tiled surface offered as much grip as sheet ice and even my tyres couldn’t save me. The ‘kicker’ that induces a tail slide I found quite easy to counteract. Am I surprisingly gifted or were the tyres an unfair advantage? I went through and lifted off the throttle and much spinning occurred! Not just the tyres then. I was impressed though. Even on doused tarmac, the car remained fully in control. It took yanking the handbrake on at 40mph to induce a rather hefty slide. Impressive.

I was glad I’d had this opportunity to test the limits in the wet as the M in M6 appeared to stand for Monsoon. There was horrific standing water, yet the Rover felt planted and comfortable. In fact, I’d say that’s the only downside of the tyres. Perhaps they inspire a bit too much confidence.

A few hours later, I was home. The Rover had averaged 37mpg again, which is mightily impressive given the on-skidpan hoonery it had endured. Even better, it appears not to have used a drop of oil. Changing it before departure, even though it wasn’t yet due, has clearly helped clean up those piston rings. I haven’t seen any puffs of blue smoke either. If I’ve cured the Honda D-series blue smoke issue with a simple oil change  – it worked with my smoky Sirion – then I will be pleased.

Now, the Rover can rest. The 2CV is being prepared (well, I changed the gearbox oil) for the 2CVGB National meeting on Anglesey this weekend, which includes the 24-hour 2CV race and hopefully a chance for some on-track antics for us non-race drivers too. Should be fun!