According to the Logic of the Internet ExpertS (LIES), buying a Rover 200/400 with the K-Series engine is about as sensible as trying to use rattlesnakes for shoe laces. “Oh they’re hideously unreliable and the head gaskets ALWAYS go. You want one with the reliable Honda engine.”

For a start, I really rate the K-Series engine. Yes, OMGHGF is possible, but then that’s the case with LOTS of engines. Even BMWs, Hondas and Toyotas – the latter’s diesels as fitted to the Lucida and Hilux Surf seem to use cylinder heads made out of rice paper. For sure, there are some weaknesses in the K-Series that seem to make it more prone than most, but the news certainly isn’t all bad. 100bhp from a 1400cc engine isn’t too shabby, and they’ll deliver in excess of 40mpg too. 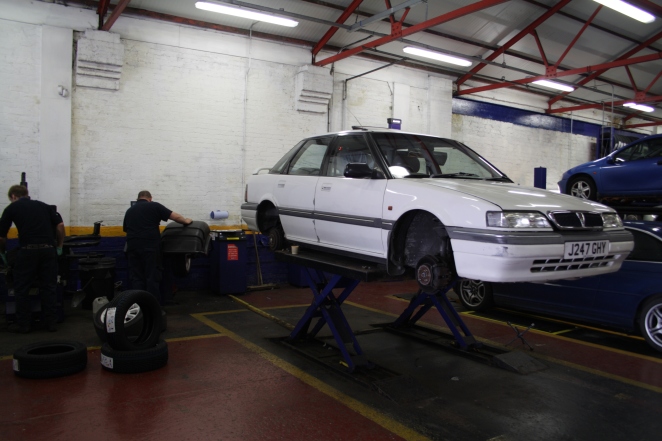 But, I’ve got a Honda with the super reliable, bullet proof Honda engine. Only it’s all a bit myth. The Honda engines can blow head gaskets too. Worse, they seem absolutely shocking for piston ring problems. I know this because my 416 will regularly pump out a cloud of blue smoke. That can mean only one thing – it’s burning oil. A quick search of various forums backs this up as far from unusual. From 80,000 miles upwards, it’s really rather common. Given that I know of K-Series engines with over 200,000 miles on them, the battle between the two engines is looking far from one-sided.

I’m not fretting just yet. Cheap motoring is full of situations like this. The Daihatsu Sirion was an oil burner when I got it and they also suffer from piston ring issues. Despite it only covering 2000 miles since its last oil change, I decided to do it again before thrashing it all the way to Northern Scotland. The Sirion was then vastly better. I shall employ a similar technique with the Rover. It’s not so much wear that’s the issue, but carbon forming around the ring, preventing it from sealing properly against the cylinder wall. This seal is necessary to keep the oil in the sump from squirting into the cylinders and making your car look (and smell) like a two-stroke. What didn’t help was Rover changing the recommended oil change period from 6000 miles to 12,000! I’ve also got no history with mine, so it could well have been neglected even more than that during its 85,000 miles.

I shall therefore treat it to an oil change, and will do so again in another few thousand miles. Hopefully that will help. I’m also hoping to get the timing belt replaced – again the lack of history is a concern. Has it ever been replaced? It should have been at around 60,000 miles, but there’s no way of knowing. Five years is generally considered a good innings for a cambelt anyway, so even if it was replaced at 60,000, that could be years ago for all I know.

Other minor improvements have also been made. Touch-up paint has been carelessly applied to previously rusty (treated and zinc primered) areas. It looks crap close-up, but will do from a distance. I’ve also fitted a missing piece of trim to the rear wheelarch and replaced the disfunctional clock. The main change since I last wrote about it is the fitment of four brand new Uniroyal RainSport 3 tyres. A-rated for wet weather grip, they certainly give a lot more confidence than the very worn/Chinese mix it wore before. A full alignment check has also improved things – the tracking was out front and rear. I’m looking forward to properly testing these tyres later in the month.

Can you spot the new bit of trim? It’s tiny

I’ve got some serious mileage to do in this car later this week too. I’m really looking forward to it. I’m liking this car a lot more than I expected to.