In theory, cheap, crap cars are great. People just don’t want them, and so don’t rate them in the slightest. This makes them cheap. Cheap is good. The knack to buying a good cheap car is to find one that’s been in a long ownership. Don’t buy one that’s already done the rounds amongst the tight-fisted or unbothered – those who want a car to be as cheap as possible and therefore won’t spend a penny on its upkeep.

When owning older cars, be prepared for plenty of tinkering

However, you still need to be prepared for trouble to strike. Like my Saab. It hasn’t taken much work to get the cooling fan fixed but it was a day of my time (though I had to fit it around writing and actually earning some actual money). I don’t mind because that enforced tinkering helps me get familiar with my new steed. I now know it has a surprisingly good toolkit – immaculate and unused until yesterday. I know it now has fresh engine coolant and that when the temperature gauge goes up, the fan WILL cut in. I know where both fuseboxes are, and which relay is involved with cooling fan operation.

Tinkering is an absolutely essential part of older car ownership. It saves an absolute fortune for a start. I used to suffer from a severe dislike of tinkering, but I think that was due to poor facilities and not enough tools. That and my own uselessness. I have little patience with myself. But while you don’t need to be a certified mechanic, it really does pay to know your way around your steed.

Is that knocking noise something that can be ignored or is the engine about to breathe its last? I have no tools and precious little equipment with me, can I still effect a repair using only shoelaces and gaffer tape? Even the art of limping home in a poorly car is an art form which thankfully, I possess. Driving a Mini with a failing condenser is an interesting experience and I once naughtily drove to a 2CV specialist with the brake lights operated by the headlight switch after a fault developed on the fuse panel. Several times, I’ve driven through city streets with no clutch. That’s always fun.

But I love it. Cars are so much more than tools to get from A to B. Yes, they demand attention almost as much as the bloody cat (but thankfully catch and shred less mice) but they reward as well – in financial terms, but also in spirit.

Ok, maybe this is me trying to put a gloss on the fact that the Saab could do with a new timing chain, the 2CV needs cylinder head work and the Scimitar has wiring (no, really?!) and steering issues. Clearly I must be wicked.

My joy at yet another new car has been tainted somewhat by the discovery that the cooling fan isn’t working. I’m glad we had a low-temperature, traffic-free trip back home that didn’t cause overheating. Looks like the fan switch is at fault, so it least it should be easy to solve. A new switch has been ordered, along with a Haynes Book of Lies.

Scandinavian beauty gets all hot

It’s hard to be disappointed with the car though – it did cost me less than £600 after all. I’m only disappointed with myself for failing to spot the issue during the test. Once again, I went into a purchase with the best of intentions and once again, I ballsed up. Imagine the catastrophe that would have unfolded if we’d gone along with my original desire to buy the Saab and then immediately undertake a drive to Kent from our Welsh home! We would have ended up on the hard shoulder of the M25 in a big steamy mess, probably with a blown head gasket and a repair job higher than the cost of the car in the first place.

Will I learn? Probably not. Just to rub salt into the wounds, the Volvo I also looked at has now been reduced to the same price as the Saab! Yet I still think the Saab was the better purchase. It’s smoother, quieter and really quite eerily quiet on the move. I reckon the Saab should still edge the blocky Volvo at the pumps too – fuel consumption according to the on-board computer (cool eh? Volvo didn’t have that – though it did have a graphic equaliser for the stereo, and overdrive…) is somewhere between 35 and 38mpg so far.

It’s all part of the adventure of buying older cars though, and I wouldn’t have it any other way.

Shock headline news! I went and looked at a car today, and didn’t buy it! Though I did still buy a car…

I’ve been keeping my eye on the classifieds. Since I sold the BX last month, I’ve been struggling to decide what to replace it with. When it comes to mixing comfort, economy and eccentricity, there’s nothing to touch it. So I gave up trying to find its equal – for the time being.

My poor wife has been driven mad by me browsing for cars. She owns a Mini, and likes going to 2CV events, but isn’t really a car person. Despite this, I’ve been trying to point out the merits of cars that have caught my attention – though it is quite handy to have someone who can calmly point out that replacing a BX 1.9 diesel with a Carlton GSi that can do 150mph may not be sensible. I’m still not entirely sure that I see her point though…

I decided that the new car had to be over 20 years old, to ensure I can insure it on my classic policy. This point was really driven home by a brief and crazy exploration of Alfa Romeo ownership – a 156 2.4JTD five-pot diesel looked ideal until I started getting insurance quotes that were almost as much as the purchase price of the car. Besides – old cars are better really aren’t they? More simple, easy to work on and a statement to the world that I haven’t been fooled by the so-called merits of a modern car. The downsides are that 20 years ago, diesels were still a relatively new thing for the mainstream market – the BX and its Citroen/Peugeot siblings really did lead the way. A Mk2 Cavalier diesel had to make do with 55bhp when launched for instance! Not ideal for the hills of Wales.

So, I decided to ignore economy. Well, not ignore. The Scimitar reminds me that an outright fuel guzzler is not ideal. I lowered my standards and decided that anything capable of 30+mpg was worth a look.

Amazingly, two very different cars leapt onto my radar at the same time. They were both right on the limit of my date cut-off, both had 2.3-litre engines, both hailed from Sweden and both were for sale in Wales. The first car was a Volvo 740GLT saloon, though of the later facelift shape which I’m not that keen on. Still, at £700 for a 144k mile saloon in stunning overall condition and with full service history, it was worth a look. It was nice to drive as well, feeling a bit like a grown up Cortina. It had that lithe, rear-wheel drive feel and went like stink – why did people feel the need for a turbocharger as well? Overdrive was an oddity for 1990 but would help with economy. Sadly, as with a previous 740 that I owned, it was let down my hideous interior plastic that created lots of rattles. It had the odd battlescar that detracted form the superb overall condition. It was in the running, but first, the competitor!

The Saab was 75 miles away, but £105 cheaper. The sun was shining, so out in the 2CV I headed. This was even better in terms of condition. 188k miles, 1 owner from new and full main dealer service history. To drive, it felt much more modern than the square-rigged Volvo. It was tighter and felt more secure – with a tough, hardy interior that made not a squeak. Mix in better economy, a more composed ride and the practicality of a hatchback and you can see why I was soon handing over a deposit. 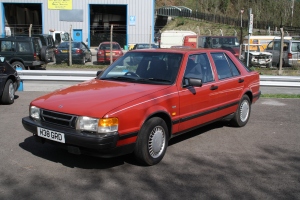 Another Swedish stunner – this Saab 9000 certainly fitted the bill

What really struck me with this pair is just what you can get for your money. There really does seem little reason to buy anything more modern, or more expensive. Will these golden days last? I’m not sure. Really, cars from the early 1990s represent the last of the relatively-simple line. The more modern you get, the more you encounter unfathomable electronics, expensive part failures and proper, built in obsolescence. Why have a switch to operate the reverse lights when a nice expensive computer can make the decision? Why not fit a dual mass flywheel, which will go wrong and cost over a grand to replace?

The future of bangernomics is certainly not assured. I shall enjoy it while I can!