A day of travel Pt2

Buoyed by the rampant success of my first post, which an entire 32 people have read, I shall continue my travelogue.

My good friend helpfully guided me to the right platform at Acocks Green train station, and the next stage of my journey began.

The seats were green and the propulsion was via diesel engine and ZF automatic transmission. Yes, further travel by torque converter.

Only for two stops though. I was deposited at Solihull. I like Solihull, but this was my first visit to the train station. It’s from. So grim that while I attempted to consume a Ginsters sausage roll, a lady who worked there struck up a conversation with a passenger about how much the toilets stank. I was forced to halt my sausage roll consumption. I no longer felt hungry.

This wasn’t quite as luxurious as I’d hoped, but was comfortable enough. The seats also didn’t hurt my eyes. The gentle thrum of diesel engine was very relaxing, in a way the dreadful noise machines of Arriva Trains Wales just are not. Most passengers fell asleep, including one who was reading a musical score.

We arrived in London, where fear was impossible to find. 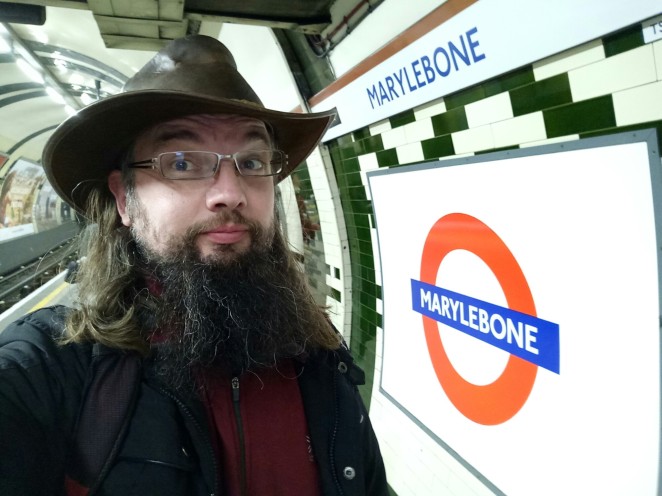 There you are. London, yesterday. As we rattled along the underground, I marvelled at how those Arriva Trains Wales noise machines actually seem quite refined compared to this. I’m not sure the London Underground is actually legal under the Geneva Convention.

At Elephant and Castle, only one lift was working, so I gamely tackled the 111 steps to the surface. I was out of breath by the top, where I discovered that Thameslink trains were in chaos due to signalling faults. I was told to jump on the train arriving at platform four, only to then be told that it was actually arriving at platform two.

I wasn’t actually sure where this train was going, so consulted the Cityplanner app on my phone. From that I was able to deduce that the train was heading to Sutton. I stayed on it, as instructed, and ended up at South Merton as I’d hoped. Not before seeking assurances from another passenger, who I thought was a guard. Oops. I broke the rules of London. He chose another carriage.

From the station, it was a short walk to my Airbnb. Very pleasant it is too, situated on this beautifully quiet road.

That’s not the actual house, but this Golf lover isn’t far away. I detected a whiff of conservative about the house owner, confirmed by a Tory sticker on the fridge. I thought it best to say I was sightseeing at the weekend rather than taking part in a march against leaving the EU. I’m not sure why, but I often find myself reluctant to discuss my day job. Scared of sounding like the car bore I so clearly am?

Anyway, the bed is comfy and the decor marvellously dated. The tea is Earl Grey though, which isn’t really tea at all.

Still, it is cheap, with excellent transport links. I now need to seek breakfast and think about work. Which mostly involves being a car bore. Lovely.

One thought on “A day of travel Pt2”