It’s a Saturday, and it’s not actually raining, so I finally had a chance to do some rust-proofing and cosmetic improvements on the Omega. First job was to reverse it up my ramps and get underneath with a wire brush and some rust converter. Vactan is my converter of choice. It’s bloomin’ good stuff, and dries to a nice, black finish that can be overpainted or waxed. There was a soft spot midway along the offside sill, which thankfully was still solid. I rubbed it back and dabbed on the Vactan. I also rubbed at surface rust in various locations around the rear axle. Reassuringly solid back here. With that done, I could apply wax – Bilt Hamber’s Dynax UB (Under Body) in this case. It’s very easy to apply, coming nicely out of the can even on a cool day.

The rear brake pipes and tow bar were also treated to a dose as surface rust was present on both. I think I may have found where the diesel smell is coming from too – there’s a small pipe that I suspect is the return, though it could be the main feed pipe for all I know. It’s just slightly damp. I will investigate that one further.

With waxing done, I set about applying Autoglym’s Bumper and Trim gel to the rear bumper. It had faded pretty badly, as you can see in this shot. 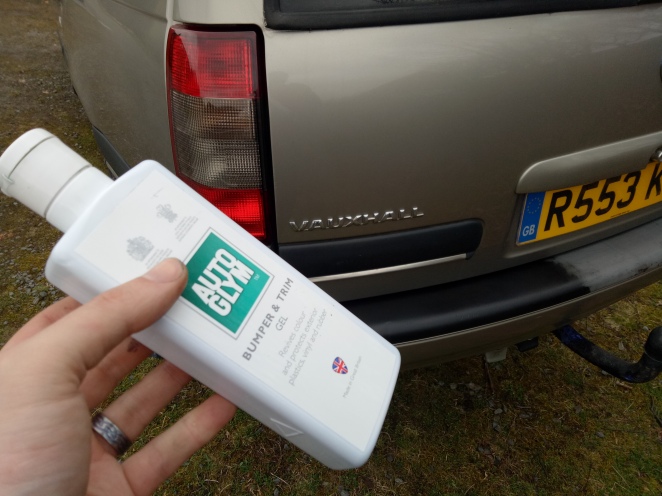 Yup, you can spot the difference.

I’ll admit that I’m lazy. I could have revived the plastics with boiled linseed oil (I don’t have any) or an airgun (don’t have one), but this stuff works well. These potions never seem to last that long, but the Autoglym stuff seems better than some Meguiar’s stuff I have, which fades again within a couple of weeks. The Autoglym stuff is also much easier to spell. I also applied it to the rear lights, though I haven’t yet done the trims on the tailgate itself. They don’t seem to have faded much at all, perhaps because they’re vertical rather than horizontal?

The end result is a car which certainly looks better, and which hopefully won’t rot away too readily. I’m now seeking some rear seals for the diff, to cure a minor leak (£21 each from Vauxhall, eep!), and I really need to get my hands on new brake discs and pads and probably flush the brake lines. It really doesn’t stop as well as it should. It does stop, and is MOT legal, but it doesn’t exactly inspire confidence, especially given how little engine braking you get (ie none, because the gearbox has a built-in freewheel function).

It’s coming along though. The main issue is that other cars on the fleet also need some TLC.