Now my long-termer Samsung Galaxy S4 Mini is being retired, I thought I should do a quick review of its replacement – the Oppo F1S.

The F1S is what’s known as a budget phone, though it still costs £250 or more. It has a screen which is actually larger than my old S4 Mini, which has positive and negative points. One the one hand, it’s a great screen that is far better for watching videos and the like. On the downside, it’s a pretty big phone. It never feels entirely comfortable in the hand. It is actually slightly slimmer than the Samsung. I’m not sure this actually helps.

My new phone. Photo taken with the old phone.

The phone runs Color OS 3.0, which is Android in a different skin in short. To someone used to an android phone, it’s all very similar. The keyboard isn’t that good though, but someone recommended installing the Google keyboard. I’m glad I did. Much better, which much a much more robust Autocorrect.

Battery life seems good. Even with hammer, it’ll easily last two days, if not two. Usually, the Galaxy was struggling by early evening, and a single train journey could drain the battery rather badly. Of course, the Oppo has a much larger battery, as it’s a much larger phone. Still, it’s impressive. The downtime is increased charge time – it does take well over an hour to fill from near-empty.

But, there’s only one reason that I bought this camera. That reason is stated boldly on the box. Yes, this phone is described as a Selfie Expert! I know that’s an increasingly common point of ridicule for many, but given I shoot vidoes on my phone, it’s very handy. The selfie camera is a massive 16MP.

I’ve been pleased with the improvement in quality over the Samsung, though the in-car sound isn’t quite as good I don’t think. So far, I’ve been shooting in 720p, purely because my laptop seriously struggles when editing 1080p. I think that might be the next thing in need of an upgrade! The phone runs very quickly though, so I can get a video started pretty briskly. It perhaps isn’t quite as convenient as the Galaxy which, while laggy, at least had a video or photo option as soon as you entered camera mode. On the Oppo, you need to switch it to video mode before you can start shooting.

It has a nice, wide angle though, which means videos show a bit more of the car interior, and rather less of just my face. I think this must be considered an improvement. On the downside, the rear camera also has a very wide angle, and this distorts images readily – like this one of the Nippa. 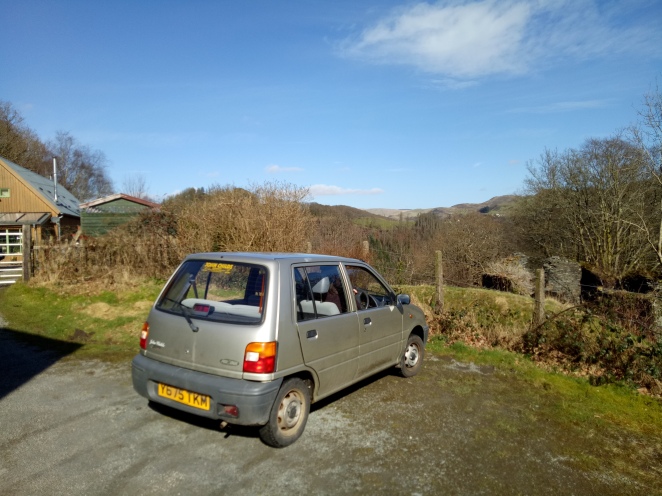 Another downside was the plastic screen protector that comes with the phone. It scratched really very badly in no time at all, and quickly got to the stage that it was too scratched to see through. I’ve removed it, though I have ordered a tempered glass protector. A wise move, as there is already a small scratch on the screen. It may be Gorilla Glass 4, but it’s still not completely damage-proof.

Overall though, I’m very happy with it. It’s the first phone I’ve actually bought – I’ve gone SIM-only – but it does exactly what I wanted.