You may be surprised to learn that the Nissan Qashqai is one of the most successful British cars ever built. Over a half a million of them (across two generations since 2006) have been sold worldwide, with the vast majority coming out of Nissan’s Washington plant, near Sunderland.

I was certainly surprised, so I thought I’d see what is so appealing about this crossover SUV thing. Proving that the Talbot Matra Rancho was truly ahead of its time, this is a car with a bit of a 4×4 look about it, but it only has two-wheel drive. That now seems to be the way of the world, with Land Rover Freelanders and Range Rover Evoques now available with only half-driven wheels.

One of the most successful British-built cars – the Nissan Qashqai.

That makes sense really, as there’s little point carrying around the extra weight of a four-wheel drive system you will probably never use. Now, people will also say there’s no point having the raised ground clearance and poorer aerodynamics of a 4×4-alike either, and that’s a fair comment. For plenty though, the more upright driving position, raised view over traffic and those chunky looks more than make up for it. You can specify a four-wheel drive version, but the vast majority will be two-wheel drive.

The car tested is the Nissan Qashqai N-Connecta 1.5dCi 110PS. The retail price is £24,660 as tested, which includes £550 for the rather fetching Ink Blue metallic paint. The spec list is lengthy, including a 7″ touch screen with ‘Around View’ parking monitor – a Grand Theft Auto view of the car, which is very handy given the curvy shape of the car – 18″ alloy wheels, a Smart Vision pack (speed limit sign recognition, high beam assist and other goodies), chassis control (various electronic driving aids) and all the usual stuff you’d expect – keyless remote central locking, electric windows and power steering (which has two settings). 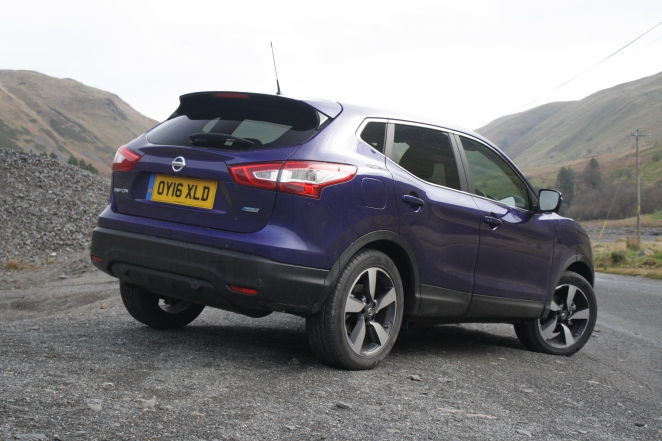 Chunky SUV styling but this model, as most, is only FWD.

The initial testing was done on local roads, which was rather frustrating in some ways. This car has so many electronic goodies that you can’t possibly experiment while driving on Welsh roads. In some ways, it could be considered a distraction, though the speed limit reminder is a good idea. It actually ‘sees’ the signs, and puts a reminder on the dash. This only got caught out once, when the windscreen was still misted up slightly and clearly the car couldn’t see a 20mph sign. Fortunately, the driver could.

I had a play with various electronic driver aids, but ended up turning most of them off. The main beam assist is particularly annoying, as I found it would often refuse to put the main beams on when I needed them. It seemed to deem them unnecessary at 30mph, and would dip them for buildings or strong reflections from puddles or walls. Sure, it was fairly good at dipping when a car approached, but only when that car was in full view. Here in the countryside, we generally try to dip BEFORE a car appears. It isn’t good enough to do that. I turned the Auto feature off. 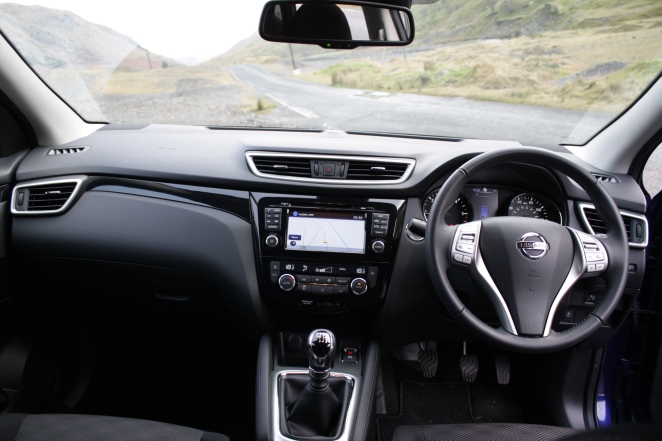 Interior styling is pleasant, some controls a bit fiddly.

I also turned the Lane Departure Warning off, because it’d bleep continuously as I drove on small Welsh roads. Perhaps it didn’t like my racing lines. The parking sensors bleeped continuously on my driveway too, scared by blades of grass and the proximity of the walls and vegetation – things that don’t overly threaten a 3.5 ton minibus that I sometimes bring down this track.

I soon set the steering to Sport mode, which gave less assistance in the bends. It isn’t a vast difference though, but it felt better. I also tried putting the driver aids to the test. Active Trace Control brakes the inside wheels on a turn when you’re pushing on a bit. It has to be said, you really do have to push on a bit to get this to activate. I suspect most people will not. There’s Active Ride too, which subtly applies the brakes to reduce body movement over crests. There’s quite a few of these in Wales, though I doubt most folk would notice the system kicking in. The ride isn’t bad some of the time, but pretty dreadful at others. It can get a bit jiggly, probably not helped by the entirely unnecessary 18″ wheels. 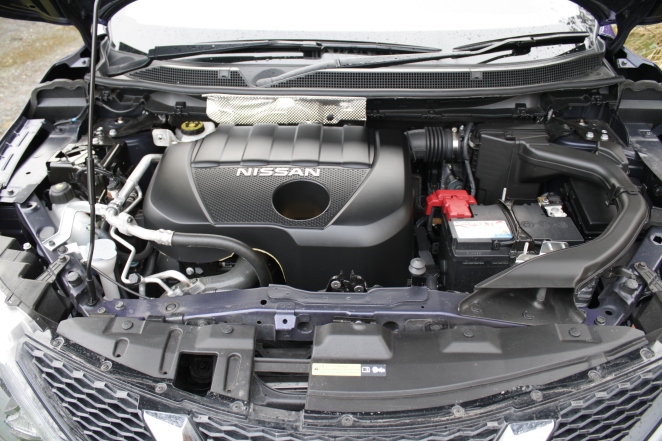 Overall though, this is a very pleasant car to drive. The six-speed gearbox feels a touch unnecessary, as the engine has a good spread of torque at lower engine speeds. Let it rev, and you don’t really access much more power. All the torque is below 3000rpm, so its best to stay down there. The driving position is superbly comfortable though, which I tested by covering over 600 miles in two days. The only slight comfort complaint is the lack of a footrest for your left foot.

Other downsides include the big sat nav screen, which is difficult to use on the move ie when changing radio station. That’s entirely down to the ride, which is not smooth enough to allow an easy selection of an option. There is one more big issue. The electronic parking brake. Quite why anyone thought this was a good idea is beyond me. There is absolutely nothing wrong with a nice, simple lever, so I shall assume it was an idea put forward by an interior designer.

Like many such systems, the Nissan requires you to press the brake pedal before it’ll let you release the parking brake. Now, I don’t know how you were taught to drive, but I was taught to balance the clutch and throttle to get the biting point before releasing the parking brake. In the Qashqai, this is quite impossible, so you find yourself having to use all three pedals. Being a diesel, you can actually get the bite point quite comfortably on zero throttle, but hill starts are something else. It does have hill start assist, but this just makes it feel like the brakes are dragging. It’s a pretty woeful technical solution to a problem that shouldn’t bloody exist. In actively encourages you to just not bother with the parking brake at all, which turns you into one of those idiots who keep their foot on the brake pedal at traffic lights. Of course, all this ignores the fact that there are now ECUs, sensors and electric motors which will almost inevitably go wrong at some point. I’m far from a fan, in case you hadn’t noticed. 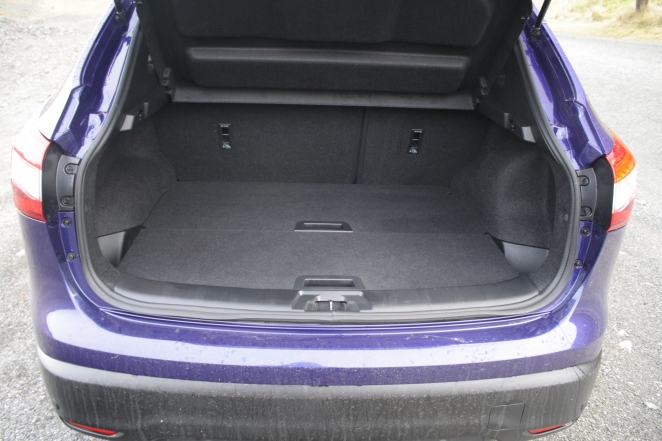 Boot is a nice size, with extra storage below the floor. Load lip is too high though.

This is all rather a distraction from the car itself, which is very impressive. It handles well (even without its electronic assists) and is whisper-quiet at speed. There’s plenty of space for passengers and luggage, with a handy hidden section beneath the boot floor. The rear seat backs fold, though not the base. However, the folded seats sit level with the boot’s false floor. There is a high loading lip though, and this made lifting a Citroen 2CV engine into the boot quite a challenge. Getting it back out wasn’t much fun either. Therefore, I’d suggest the Qashqai isn’t ideal if you plan to move a lot of engines. It is more economical than a 2CV though, delivering an average of 51mpg, and achieving 56 pretty easily on a run. Mind you, that’s some way short of the ridiculous manufacturer claim of 73mpg. Manufacturer figures have about as much truth to them as the tabloid press. Do not believe them.

After a week with the Qashqai, I had to admit that I was impressed. It’s a very good car, and rightly popular – I saw loads and loads of them on my travels, which is hardly surprising given how many have been built. Whether you like it or not, the truth is that this car does appear to deserve its success.

One thought on “Tested: Nissan Qashqai”