EDIT – now with video! Scroll down

I’ve really been cracking on with the 2CV, thanks to a break in workload for the most part. With the engine absent, there was still plenty to be cracking on with. Electrics for a start. I got the loom fitted, dug out the battery and basked in the glow of a full set of working rear lights. Lovely! 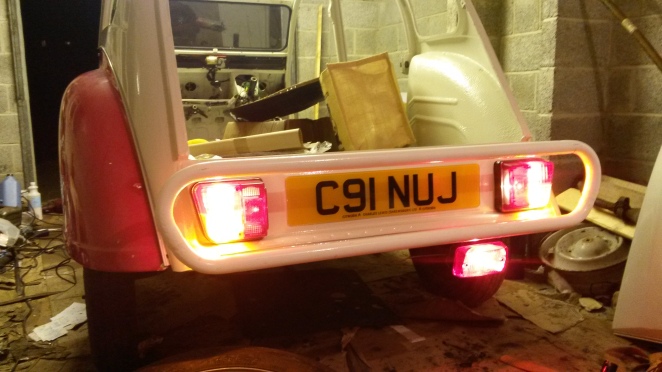 The fog light will be joined by a reverse light at some point, but that might fall outside the scope of getting the car road legal. Will be handy for reversing on the driveway at night though…

You’ll also note that one rear wing has been fitted. This required drilling for the 5mm set screws that hold the leading edge of the wing in place. I did not enjoy the drilling bit, and unleashed Vactan and Bilt Hamber Dynax UB to try and keep rot from gaining a foothold here. I’ve put the old, glassfibre wings back on for now. Well, glassfibre doesn’t rot does it?

Speaking of wings, the front wings have now had a final topcoat and then a coat of sealer. I’ve received replacement headlamp bowls too, so they’re now undergoing a rattle-can transformation too. Now the wings have dried, I’m really pleased with the final finish. It’s far better than I could have hoped really.

Not that everything has been going well. Refitting this brake bracket has proved a nightmare. It supports the brake master cylinder, and also the pedal box. Sadly, the profile doesn’t quite match the aftermarket bulkhead panels, so getting it to bolt down is proving tricky. I’ve opened up the holes a little, as it really isn’t far from fitting, just not close enough! 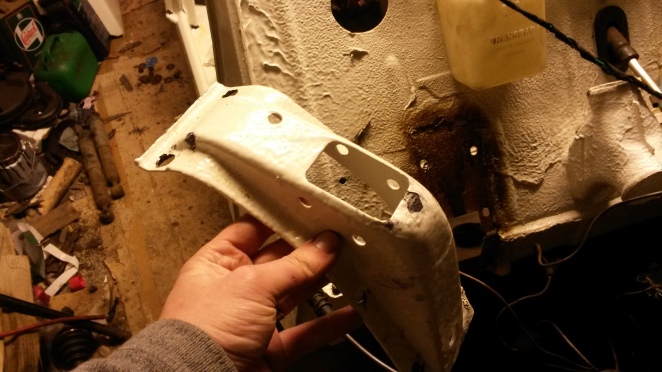 Annoyingly, this brake bracket won’t fit. I hope to defeat it with cunning.

Meanwhile, I’ve finally got the engine back! It proved an ideal way to test a Nissan Qashqai (full review coming soon), with the engine sitting very nicely in the boot, strapped down via the handy lashing points. 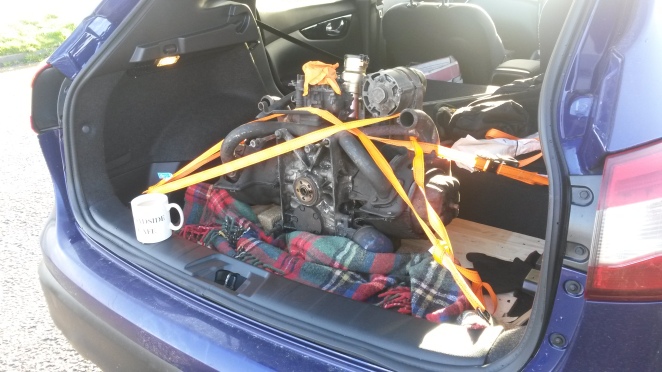 The engine on its return journey, aboard a Nissan Qashqai.

After a slight panic, when I realised I didn’t have any flywheel bolts, I managed to order some from ECAS 2CV Parts, just catching them before they finished for Christmas. Annoyingly, I’d been at ECAS buying more bits just the previous day. Oh well! They were able to sling them in an envelope with a speedo cable, that had been out of stock when I was there – another essential ingredient as the old one has fallen to pieces.

That allowed me to refit the flywheel, fit a brand new clutch and, after a second go at aligning the clutch, slot the engine home with the assistance of Rachel (she’s helped me do a few engine swaps now. She’s really quite good at it).

Then I had to refit the fuel system, connect up the engine electrics and I was ready to get the engine running! Only, it wouldn’t run. Pulling a spark plug revealed a lack of spark, so I spent a frustrating afternoon chasing the electricity. I checked and double-checked the wiring to my Vellerman transistorised ignition, even remaking a section of wiring in case that was at fault. I could see that the points were opening, but still no spark. I gave in and pulled the cooling fan off to access the points box. The gap was tight, so I opened it up, but still no spark. Ok. Maybe the Vellerman kit was at fault. Easy to check – I disconnected it and grabbed a spare points box (that handily had a condenser already connected up to it – you don’t use one with the Vellerman kit).

Now my spark plug was sparking away very merrily indeed! Time to make some noise.

She's alive! Hardly smooth, but she runs at last. Had to revert to points and condenser after hours of fail. #project2CV pic.twitter.com/RGIq1W7luO

I was very pleased with that. Sure, she was spluttering a bit, but then engines do like back pressure. And accurate ignition timing (I’d pretty much guessed). And the correct mixture. And fuel that isn’t months old…

Which brings us pretty much up to date. I’m still hoping to get her to an MOT station next week (I’ve found one open Wednesday to Friday), but there’s still quite a bit to do. The doors still need building up and fitting, as do the front wings and headlamp bar. Oh, and the bonnet. And the rest of the exhaust system. And the brake master cylinder (which means that sodding bracket, then bleeding the system). Oh, and I need to change most of the wheels. And fit shock absorbers. And the other rear wing. Still plenty to do then! Still, it’s an awful lot less than there was to do. Lovely.