I’ve finally had an entire weekend at home, with no magazine deadlines to worry about, no distractions (other than a Nissan Qashqai I’m currently testing – more on that soon) and plenty of work on the 2CV.

Paint has taken up a large part of the past three days. It’s a slow business, even when you do a poor rush job like I am. Friday was spent prepping the front wings, which mostly meant treating any rust, sanding the surface and getting one wing into primer. 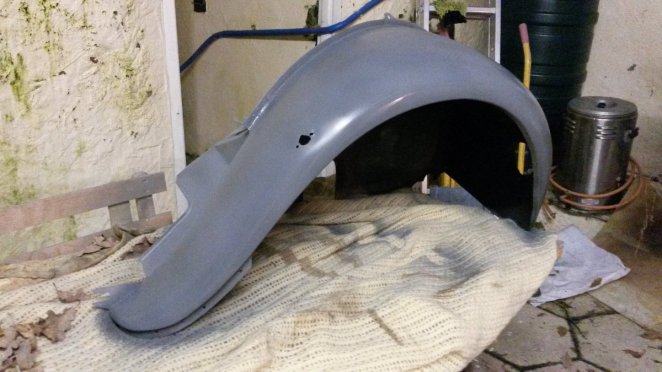 I’ve used a zinc-rich primer, in the hope of keeping that nasty rust stuff at bay. I started with Halfords’ own brand stuff, but it’s very thin, has poor coverage and two tins were gone in no time. I then switched to Plasti-kote’s zinc-rich primer, and this was far better, with a much meatier spray straight from the rattle can.

I also put a few coats of primer on the headlamp bar. I have two spare bars, and one was declared not fit for reuse. A kindly friend is sending me a pair of headlamp bowls, as the originals were, unsurprisingly, rotten. Anyway, here’s the bar, complete with a totally inadequate layer of cardboard.

Spray away, over bar and driveway…

You may also note in that picture a small, rectangular piece. That’s the surround for the speedometer. I first primered that in white in about 2006, and never got around to putting a top coat on it. Maybe this time! Once I get some. In my confusion on Friday (I’m not very good at shops) I failed to buy any top coat…

I got some for the front wings though, and today has been about getting that onto the wings. It’s a satin red (I really like satin paint on cars) and slightly pinker than the factory Sunrise Red. It’s Plasti-kote again, and it also went on nicely – if not quite as nicely as the primer. 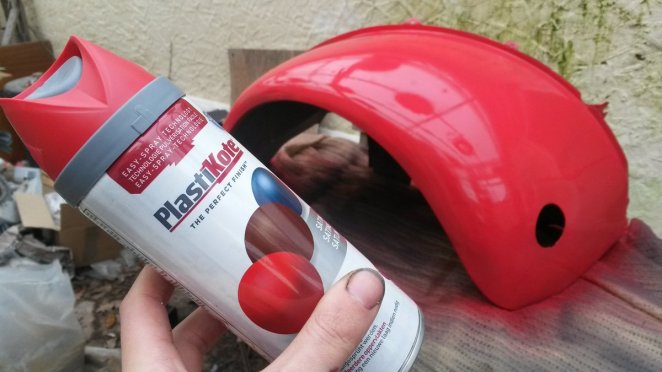 In total, I used about two and a half cans on the front wings. Not all surfaces needed painting I should point out. That was two coats per wing. I was forced to use gentle heat from a hairdryer to encourage drying, as it was hovering around zero last night, and lower than ten degrees centigrade today. Not ideal. Including waiting time, it’s taken three days to get the wings in paint. Bodywork is a slow business, even when you think you’re doing it quickly!

While waiting for the paint to dry, I set about a number of jobs on the 2CV itself. To help me wire up the fusebox, I need the fog light fitted and wired in. It’s one of few things that uses a fuse (the 2CV has an entire four fuses) and hopefully I can now crack on with getting the wiring completed.

I also refitted the rear number plate and adventure bar. I needed some visual progress! That inspired me to then refit one of the rear wings. I’ve been putting that job off as I was struggling to decide which wings to use. I’ve decided to use the glassfibre wings that were on the car pre-rebuild. They’re scruffy, but won’t rust! In time, I’ll paint them to match the fronts, but that’s not a ‘get it legal’ priority. Gosh, the visual difference is amazing though!

It’s amazing what bolting on a few parts can do. From this angle, she looks almost ready to drive away! Mind you, there’s clearly quite a lot still missing. The rearmost side windows are still in Bradford, so I’ll be collecting them (along with a few other things) next week. I’ll also be visiting ECAS 2CV Parts again, as there’s yet more bits to buy – including an exhaust system.

The body is getting much closer to completion though. Obviously, the doors still need fitting, and they still need building up too (no glass currently). The seats need fitting, and the flimsy excuse of a dashboard. That’s a few bolts and screws though. It won’t take long. Nor will the seatbelts, especially as I’ll probably only fit the fronts to get her legal. There are some minor issues to overcome with the rear – the clips that hold the seat in place are mullered (or rather, the rusty remnants of the old bolts are causing them to no longer function).

The engine is still a notable absentee, but plans have changed there. I just don’t have time to wait for it to be rebuilt so, seeing as it was running fine, it can wait. I’m collecting it on Wednesday. It needs a new clutch fitting to it (one of the spring finger bits has snapped off), but hopefully I can have it running by Christmas.

At the moment, the deadline of 8th Jan feels very possible. Let’s see how the next week goes…