I really have been dashing around a bit over the past seven days, and that has seen the XM clock up 900 miles – including towing a caravan to Llangollen and back.

It’s a car that infuriates me at slow speeds (horrible clutch, tired engine mountings, stupid, stupid foot-operated parking brake, poor ride around town) but still amazes me above 40mph (tons of torque, floaty ride, not what you’d call noisy). On the way to Kent last Monday, I discovered that it was delivering a mightily impressive 49.5mpg too. That’s not bad for a huge, executive barge with an old-school, mechanical-pump diesel engine. It’s about the same as a Rover 75 diesel I owned a few years back, which had similar power, not as much comfort and about six times the complexity. It had several ECUs for instance. While the XM has a few, none are related to the running of the engine. It’s actually a very simple machine.

But, even simple machines need maintenance, and after it developed notchy steering, I was forced to remove the LHM tank, clean the filters out with petrol and pour in some flushing fluid. You’re meant to leave that in for 500-1000 miles, which can sometimes take me a month or more. Not this week! 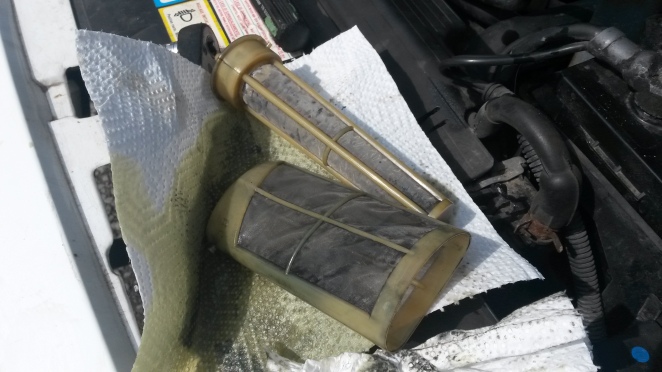 In fact, coming back from Llangollen, the XM’s steering went all notchy again. I guess this means the flushing fluid has done its job and the filters are once more all clogged up. That’s why today, I was planning to drain the fluid and replace the LHM.

I started by replacing the rear brake pads, because they’ve been low ever since I bought the car. I have a set of pads – I have no idea where they came from – so thought I might as well take the opportunity to replace them. It’s also a chance to check the wheel bearings (nearside rear isn’t great) and the operation of the calipers themselves. The rear brakes see very little use as most of the vehicle weight is up front, and brake pressure supply is carefully regulated by the rear suspension units. The more weight in the back, the more the rear brakes operate. That’s why the pads that had a few mm of pad depth in November 2014 still have a few mm of pad depth so much further down the road. However, new ones mean less piston is exposed to the elements, and it just makes me happier – especially given that towing really does get the rear brakes working.

Sadly, with that job done, I managed to seriously twinge my back as I moved the trolley jack to the front. I’m an idiot really, as I’ve done exactly the same thing before. My jack is very heavy! So, I’m sitting in the house, trying not to move very much and had to abandon the job halfway through. 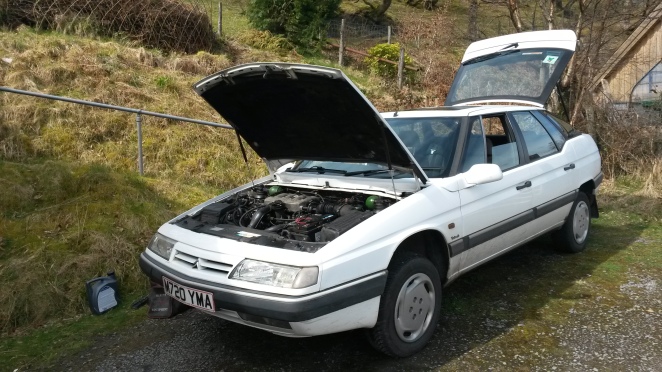 XM after the first filter change. All was well. For a while…

But, all this does make me realise one thing. I still really, really like the XM. Yes, the low speed ride is annoyingly poor (a Jaguar trumps it easily) and the steering is a bit dead, and the sunroof is a bit noisy and still leaks a bit on occasion, and the dashboard plastics are horrible, but somehow this car keeps making me smile.

Which means I’m going to have to scrape together the money to get the clutch replaced. It could be the original, but the operation is needlessly heavy. I think it could transform how the car drives. Anyone fancy the job?