You people are amazing. I started my collection fund 23 hours ago and already, it stands at £614. Extraordinary!

What’s been even more heart-warming is the personal messages that have often accompanied payments. Messages saying how much folk enjoy the blog, the writing and, perhaps most frequently, how they’re looking forward to seeing this 2CV back on the road again. This car really does tug on the heart-strings it seems – not just mine!

I’ll obviously be providing regular updates on this project, and will be recording a new video for my YouTube channel later on. I’ll have to try and find sufficient words of thanks.

But today, I’m going to tell you a bit more about this car and why she’s become such a huge part of my life. Bear with me, it could be lengthy.

I purchased Elly in 2000 for £450 – with a fresh MOT! How times change. I bought Elly from a 2CV specialist in Birmingham called Bob, who still sends me a Christmas card every year. At the time, she had 89,000 miles on the clock, and a horrendous gearbox oil leak. So, I bought another gearbox for £20 and got to know my new 2CV by changing the gearbox. Again, how times change.

Two years later, Elly hit the milestone of 100,000 miles. I went on a roadtrip to ensure she clocked, which she did somewhere near Wolverhampton. We ended up in Snowdonia.

I was automatically drawn to Wales even back then. I now call it home.

Anyway, I was in a rush to get her to 100,000 miles, because she was still on her original chassis. I knew she had no hope of passing another MOT (two successive passes had required increased levels of patchery) so I decided this would be the first 2CV I actually restored. I thank a friend in the club Dave Burdett for forcing my hand. He wrote a very eloquent piece in 2CVGB News about how we had to start protecting the 2CVs that existed, because no more were being built. He was right.

So, restoration one commenced, which coincided with me getting a digital camera. Well, the rebuild part did. I shipped the bodyshell and axles off to Pete Abbott in Lincolnshire, and he set about restoring the bodyshell on a new GW Fabrications chassis.

Elly during her first rebuild. Yes, that is a genuine pick-up behind.

I then shipped my bare 2CV back home, where Pete confidently predicted it’d take me a couple of weekends to get Elly back on the road again. 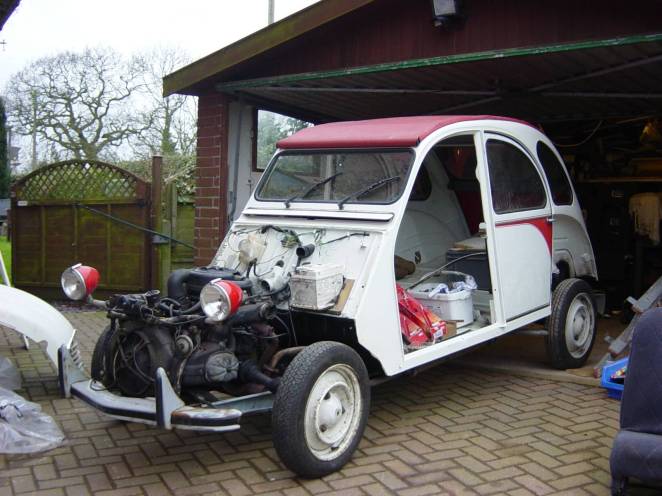 Almost there! Now, where do those wires go again?

I was even more clumsy with spanners then than I am now, if you can believe it. I also had the difficult job of trying to remember where everything went, months after it all came apart. It was a very valuable learning experience, that’s for sure!

Elly returned to the road in April 2003. It was a little disappointing in some way, as I’d spent over £2000 to have my 2CV look very much like it did before! You see, I couldn’t afford (pattern developing…) a full restoration, so it really was just the bodyshell and chassis that were sorted out. All the doors, wings and other panels were just as scruffy as they were before!

After spending over £2000, she looked much the same.

That shouldn’t have mattered, but it did. Especially as she was still my daily driver. Between tests in 2006 and 2007, she clocked up 15,614 miles. In 2005, which predates the computer system, she visited Belgium and Scotland for another frantic year.

But I’m jumping ahead a bit here. In 2003, I met the lady who would become my wife. And she really liked my 2CV. Even though the first time they met, my 2CV hurled its door handle into a muddy puddle in disgust. They get on much better these days, possibly because for our first Christmas together, Rachel made the 2CV a set of door cards.

We decided to get married in 2006, and I decided it’d be nice to have a shiny 2CV again. So, she was shipped off for another bout of restoration. This time, the full works. Rarely, I was actually in a (very) well paid job at the time, so could actually afford it. 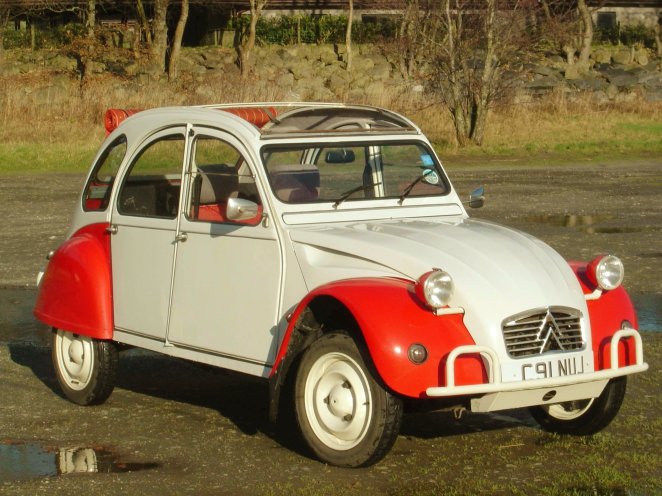 Elly after her 2nd rebuild.

Quite the transformation eh? This photo was also taken in Wales, as we’d collected the 2CV in Lincolnshire on a Saturday, so we could take part in a road run in Wales the following day. Yes, that was a silly idea, especially as when we turned up to collect the 2CV, it wasn’t ready! We had a frantic few hours screwing bits back on, before driving right across the country. You’ll note that we didn’t even have time to fit the stripes to the doors. Amusingly, the road run started in Aberystwyth – near where we now live.

It meant Elly was looking all set for our wedding.

Thankfully, Rachel was very accepting of the fact that my 2CV really was a part of the family. Elly the 2CV remained in daily use as I swapped jobs and became a motoring writer in 2007. That gave opportunity to take part in fun events, and we did more than one rally together! I also developed a habit of thrashing her around race tracks… 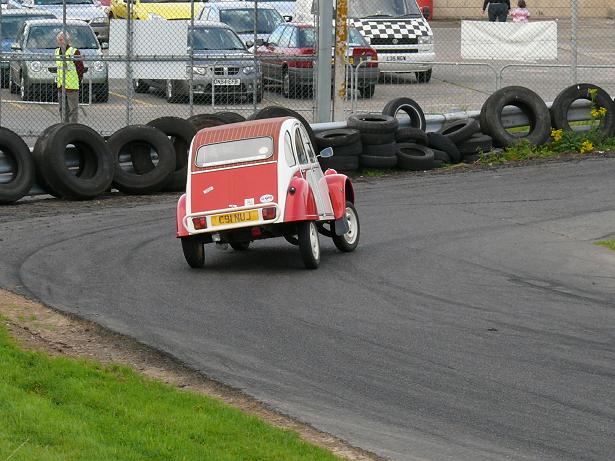 Giving it hoon on the Haynes Motor Museum test track at a Retro Rides Gathering.

But, bad times were coming. After just a couple of months, rot was creeping in where the paint had cracked. That was nowhere near as bad as what happened next though. Elly got smashed up the arse by an amorous Mondeo, and shoved into a truck! Isis Recovery as it happens… 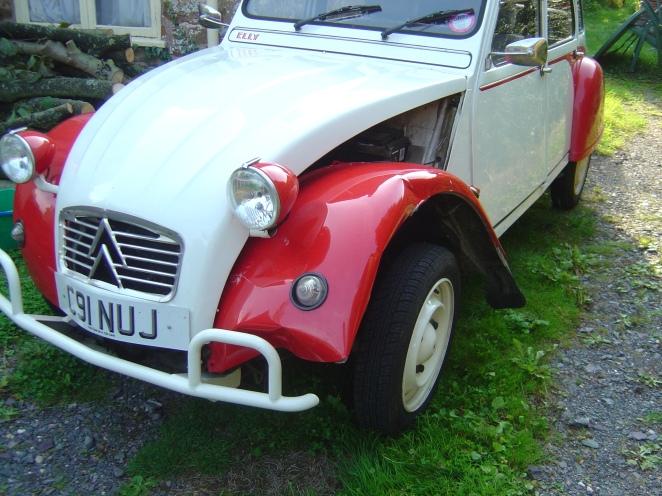 The truck cut me up on a roundabout, by deciding to go right from the left hand lane – I always give trucks room, but he was clearly entirely wrong, as this was a roundabout with two very clear lanes on it, and he was in the wrong one. I performed a perfect emergency stop, which caught the Mondeo driver unawares. 2CVs stop quickly! BANG, BANG and suddenly I was sat in the back of my 2CV (the seat came off its runners) and worse, Elly was driving away with me unable to reach the pedals! Somehow I stopped, but the damage was done. The beautifully restored bodyshell had folded up at the rear, the beautifully restored front wings were both destroyed, and the gearbox mount had gone through the engine. I was gutted.

I shall continue this tale in my next post. The sun in shining, and I must take the Dyane for a run to get its engine run in! Thanks for your contributions so far, and if it feels a bit odd to give someone money to restore a car, don’t forget that by buying the magazines I write for, you’re effectively paying my fee. By giving directly, you’re just cutting out the middle man!