I’ve got a seriously busy workload at the moment. It’s great! I look forward to telling you more about why that is in the new year. However, it is causing me to struggle for tinkering time. I somehow found enough moments in the previous week to rip the Dyane’s engine apart, but the only reason I was working on the Dyane is that it’s in my garage. It seems to have been raining here for weeks, so working on the ‘big’ cars of the fleet is just a complete no-no. That’s a shame, as there’s plenty I could be getting on with. Like the XM’s sphere change.

As you’ll recall from a previous post, I’d run into issues trying to replace the rear centre spheres (months ago!) but a specialist had managed to crack it free for me. When I woke up this morning, it was actually not raining so after enjoying a few minutes of wondrous surprise, I got up and went straight out to work on the XM. 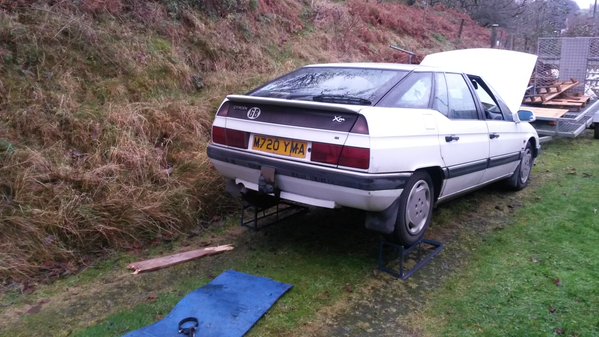 The centre rear sphere lives up above the exhaust, under the rear floor. So, it was out with the ramps, suspension on full and nervously reverse the XM up the ramps (they’re about as wide as the tyres are). Then I could crack the sphere off, which would have been better if I’d cracked it the right way first time around. Hey ho. Once I forced my non-breakfasted, very sleepy brain to work out which direction the sphere should turn, it quite easily turned a few milimetres. Now I had to drop the suspension and release the system pressure by undoing the screw on the pressure regulator. This is buried right down the front of the gearbox and is best accessed from below – not an option when the nose of the car is now millimetres from the ground. I had to go in from the top. Which makes a frustratingly fiddly operation as you can’t actually see it.

Not as frustrating as trying to undo a sphere underneath an XM which is on its bumpstops, even if it is on ramps. You see, the human arm just doesn’t bend in quite enough places for you to get your hands where they need to be. Cue lots of wriggling, a lost hat and a fair amount of swearing. The neighbours probably prefer it when I have a lie in…

Eventually, I got my sphere removal tool in place once more and off it came. Almost straight into my face in fact. Naturally, LHM (liquid mineral oil) began dripping everywhere and I’m pretty sure quite a lot of it was mopped up by my hair. I chose not to shower BEFORE this activity with good reason.

However, I was soon able to tighten it up hand-tight (all you need) and then it was another frustrating root around the lower reaches of the engine bay to do the regulator screw back up. Then I was able to start the engine, select high and watch the car lift itself gracefully into the air – something it seems much happier to do after this sort of a job than any BX I’ve ever owned. 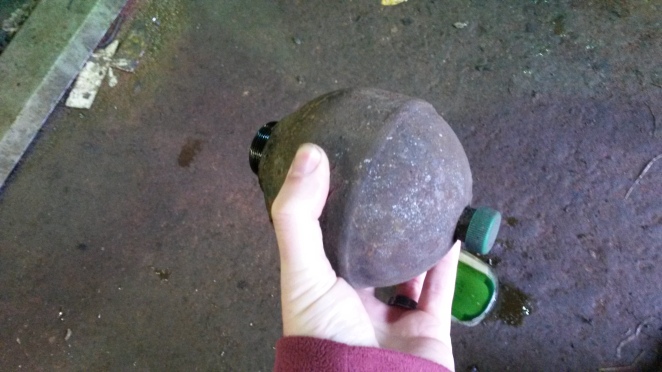 I had a peek under the rear, just to make sure there were no signs of escaping LHM, topped up the reservoir (every time you remove a sphere, you lose a little LHM) and dropped the car to normal height. I then gave the rear corners a good bounce. Wow! Floaty!

Back up on high, off the ramps and I was able to go for a test drive. Now, I’ll concede that it still isn’t brilliant – no strut-equipped Citroen ever is – but the ride certainly seems more refined. Still not great over really rough terrain, but out on the open road, it wafts as it should! Going over crests, you feel the car just float back down to its regular running height in a way no coil-sprung car can match. I’m quite seriously pleased. Now I’m STILL trying to find a caliper slider kit (for less than the £50 Citroen wants for what is a pretty small bit of metal) so I can finally overhaul the brakes. Another frustrating business!