I missed the 2014 running of this event due to a magnificent lack of funds, having not missed one (as far as I can recall) since 1997. Registers’ Day is the annual show and shine event for The Deux Chevaux Club of Great Britain, one of two annual shows the club holds, but the only one with a traditional ‘show’ element. Cars gather under the various registers within the club – old cars, 1970s (Drum brake), 1980s (disc brake) as well as Dyane, Ami, Bijou, Mehari and Van. There’s a category for vastly modified machines – the ModCons – and H Vans attend as honorary 2CVs. This seems entirely based on the fact that they share headlamps and indicators.

It’s a very laid back event, with none of the stuffiness that can invade some shows. The voting is done entirely by attendees of the show. There are no officious judges and the cars that catch most eyes tend to win. Over the years, people have arrived over the weekend (as we did) so you can spend the Saturday relaxing with like-minded friends – such as Will Waldron and Joey Cawser who own these delicious, beige 1970s 2CVs.

It really is the perfect place to unwind after a busy week.

I have to remember at these events, that the gatherings of such rare cars are actually quite remarkable to the untrained eye. After all, seeing just one Citroen Ami out in the wild is quite extraordinary. To see a huge line up (around 20) is quite remarkable!

At the end of the Sunday, prizes are awarded and the cars that came first and second gather in the ring. What a truly beautiful selection.

To get to this event required a lot of driving. Seven hours on the Friday (due to traffic) and five hours even in the lighter conditions of Sunday (including a food stop). Fortunately, the XM acquitted itself well and clocked up another 500 miles without any trouble. I may have been sad to leave my own 2CV at home, but the XM certainly is smooth and peaceful! Can I get my 2CV restored in time for the 2016 Registers’ Day? Time will tell… 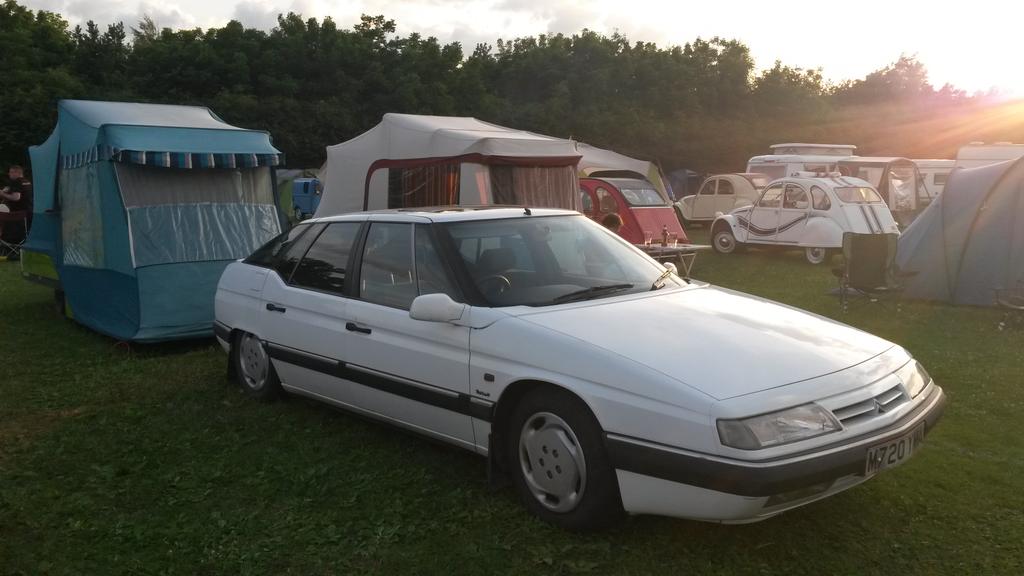