My fleet: A cunning 2CV MOT plan is hatched

I got woken this morning by the workmen on the narrow gauge railway, performing hedge-trimming activities at the ludicrous hour of eight o’clock in the morning. Perhaps this is why I stumbled into the land of the living with the hair-brained scheme of getting my 2CV MOT tested. I reasoned that after all, I didn’t know for sure what Elly the 2CV would have failed on had I put her in for an MOT back in April, before her MOT expired. 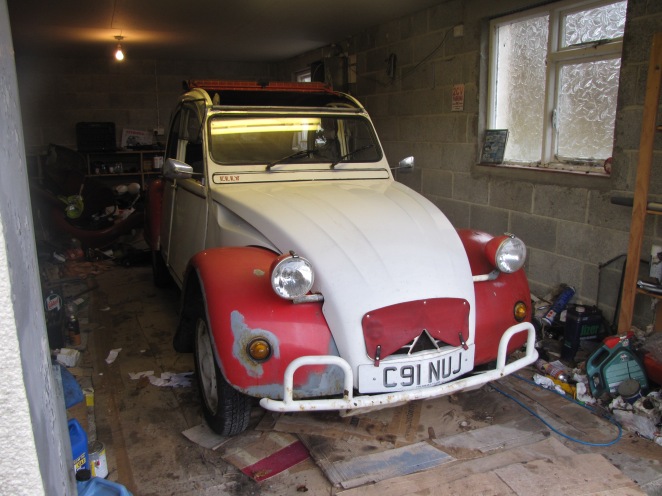 Look at her poor little face! Maybe I should park her the other way around.

Conveniently, I do some occasional work for a community bus scheme in the next village, located in the same premises as an MOT garage. I had bold plans to book an MOT and take Elly down for a fact-finding mission. After a cup of tea and rather more functioning of the little grey cells, I decided it made more sense to drive my XM to the garage and have a word with the MOT testers instead.

So, that’s what I did. Sorted a few things in the office, then sought out the testers for a few pointers. The key corrosion restriction is that there must be no serious rot within 30 centimetres of a body mount (where bolted to the chassis), seatbelt mount or mountings for the seat themselves. I know Elly has a fair bit of rot around the rear seat box. I reasoned I could merely remove the rear seats and associated belts (I can live without a rear seat) and that’d be that.

I returned home full of enthusiasm. I grabbed a tape measure and headed for my garage. Prodding around the seat box area, I realised things were more solid than expected. Brilliant! Then I crawled underneath and prodded around a bit. Oh.

How rotten is my 2CV? I decided to measure it. This rotten. This is the floor of my garage. pic.twitter.com/C8jfCaOral

Things were very crumbly indeed. Worse still, this rather serious rot was far closer to body mountings and front seat belt mounts than 30cm. Removing the rear seat was a hideous bodge I could cope with. I can’t really remove the front seats. Bumhats and, indeed, arse.

Perhaps I won't waste my money on a test then. I believe the phrase is Oh Cock! #2CV #rotten pic.twitter.com/l0W1q1pj86

Now, I’m not foolish enough to have considered that I was on a hiding to an MOT pass without doing any work at all. For a start, I’ve just remembered that I pinched one of the headlamp relays for the XM and naturally, the fog light doesn’t work. But I did also have enough realism floating around my veins to know that welding was definitely going to be needed. It’s a question of how much. This is starting to feel like trying to dry out a used teabag so you can use it again. Thinking about it, a tea bag probably has more structural strength. And is probably better at keeping water out…

Common sense would suggest that I just strip the car down so further driving desires are entirely out of reach. Having the car sitting there, willing to go, is slowly driving me mad I think. I had to distract myself for a week with an electric Golf for heaven’s sake. Though that backfired as I had to enter the garage every day to charge it.

Others would suggest that I should weld it up myself, so as I’m fed up of repeating my feeble excuses for not doing that, I shall not do it again. Ok. I will. But only briefly. Suffice it to say that I’m too hirsute, too impatient and too easily distract-ooooh look! Cats on the internet!

So, for now, it’s back to the boring world of saving money up so that I actually can get this car rot free. Expect my next frustrated meltdown in about a month’s time. I apologise for whining like a teenager.