I did a really stupid thing

This is my confessional. The other day, I made a serious misjudgement that could have had very serious consequences. Fortune saved me from disaster, but it shouldn’t have happened at all.

I was having my final drive of the Rover 400, as I delivered it to its new owner at Birmingham International (he’d got a train there, he doesn’t live at the station). I was only about 10 miles into my journey, but I was getting frustrated at being stuck behind an articulated lorry on one of my favourite stretches of road – the A44 between Llangurig and Ponterwyd in mid-Wales. 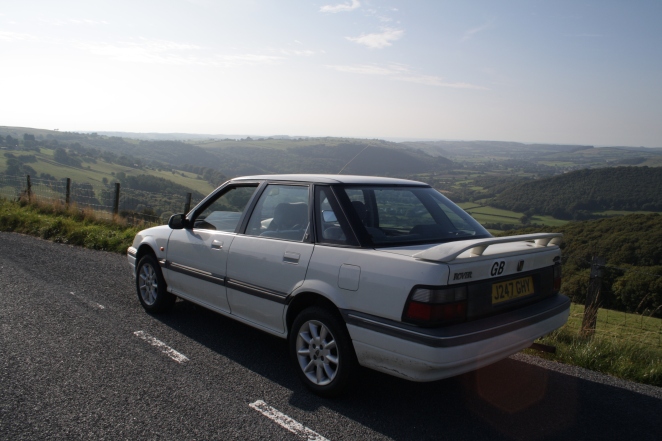 Wales is full of beautiful driving roads, but they must be treated with due care and attention

I spotted an overtaking gap that I thought I could make, so I went for it, dropping a gear and shoving my foot hard down on the throttle. I was wrong. I was halfway alongside the lorry when a van appeared coming the other way. I had no time at all to make a decision. My decision was to keep my foot down. The Rover was entirely failing to really gain pace in a way that felt satisfying. Buttocks were clenched. My heart sank. I wasn’t going to make it. Fortunately for me, there was a layby on the other side of the road. The van swerved enough into it for me to complete the manoeuvre. I waved a pathetic apology. The truck, quite rightly, sounded its horn. I attempted to apologise via the medium of hazard warning lights. I felt like a complete idiot.

That was so close to being a really nasty accident, and it was entirely my fault. Yes, this road is short of good overtaking spots, but there are better places than I had chosen. Yes, being stuck being a lorry is frustrating, but it’s hardly life-threatening is it? My overtake was.

I don’t like making mistakes but I should have known better. This road frequently claims lives – a family of four were killed on this stretch in June 2014 – with overtaking likely to have been the cause. How on earth had I been so stupid?

The thing is, we’re only human and humans do make mistakes. I can hold my hand up and say I got my decision entirely wrong – but it was reminded that in a car, wrong decisions can end very badly indeed. If anything, modern cars encourage such behaviour, as even a shopping chariot can have a bit of grunt these days. There’s no way I would even have considered that overtake in my 2CV.

There are often calls to make the A44 safer. I’m not sure how you do such a thing without putting some horrific speed limit upon its entire length. But, it isn’t the road that is dangerous – it’s the people who use it. Only yesterday, I witnessed a Peugeot 107 (or similar) do exactly what I did – forcing the oncoming vehicle (in front of me) to brake to ensure the Peugeot could complete the overtake. People just don’t give what is a dangerous exercise a suitable amount of thought. Please do!

I admit to my stupidity because I hope it’ll be helpful to others. You really can’t be too careful when it comes to overtaking. I’m not saying don’t do it – I did plenty of it coming home in the XM later that day – but DO overtake safely. Make sure you CAN see a sufficient amount of clear road and have a good long think about what you’ll do if a car suddenly appears around that next bend. It really is a matter of life and death, and airbags are sod all use at these speeds, as Fifth Gear proved with this all-too-real possibility of a head-on smash. You don’t want to try this yourself.

4 thoughts on “I did a really stupid thing”