It has taken several months, but I’ve finally finished refurbing the Discovery’s steel wheels. I’m very happy with the results. 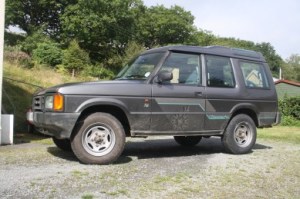 Actually, the work itself only took a few hours, though it’s a job that requires a huge amount of waiting. I rubbed the wheels down – with a wire brush initially, then sandpaper. I then applied two coats of brushed zinc-rich primer, to hopefully keep the rust at bay, before spraying two coats of silver wheel paint followed by two coats of clear lacquer. I then waited a few days for the paint to harden before getting them refitted. Sadly, the loss of sunshine meant the paint was still a little soft. I’m hoping it’ll be ok.

It now looks far, far better than it did when I bought it. Here’s a reminder.

As she arrived. Shonky

To recap, the front bumper has been painted, the sill steps removed (as they were entirely rotten) and the wheels refurbed and then fitted with new, narrower rubber. The tyres are now correct for what early Discos wore as standard – 205/80 R16s. It came on 235/70 R16s which were optional. I prefer the look of thinner rubber and reckon there are advantages in mud and snow too.

I’m very pleased with how this car is coming along and will be using it this weekend for a lengthy trip to North Yorkshire, for a car meet and to explore some greenlanes up that way. I fear that the future of greenlaning is far from secure, with the news breaking just today that The Roych greenlane in the Peak District now has a Traffic Regulation Order on it, banning the use of mechanical vehicles. No doubt ramblers will be overjoyed at the news, but I’m deeply saddened. When you consider the amount of greenlanes you can drive versus the number of footpaths, there is a massive difference. It is very, very easy to find hundreds if not thousands of footpaths that go nowhere near a greenlane. I fear this is just the start of the end for greenlaning, which I find desperately sad. Sadly, I fear it’s a hobby ruined by a few idiots and as more lanes close, heavier traffic will develop on the remainder until those are lost to us as well. The countryside should be for all. There’s still enough of it out there! The people complaining don’t seem so ready to call for actual, metalled roads to be closed – the ones they use to access the countryside. A bit of toleration goes a long way and after all, I quite like to enjoy the countryside on foot, not just behind the wheel of a 4×4.

Anyway, I’m looking forward to seeing how the Disco performs on a long trip and shall report back next week.