Did I get what I want?

Only a few days ago, I whinged that I wanted a nice car. Have I managed it?

Brushes up nicely doesn’t she?

Well, yes. I think I might have. After a day of polishing and a few more miles covered, I have become rather fond of the new motor. Don’t worry – I’m not going to start raving about it being one of the best cars ever built – it isn’t – but it is in nice condition and requires very little effort to drive. It’s exactly what I was after. 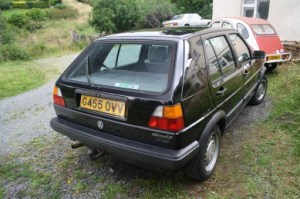 Shiniest car on the fleet

It’s nice to own something so basic again. Ok, not as basic as a 2CV, but for what it delivers, it’s pretty low on spec. The engine is fed with a carburettor – for which a manual choke has been retro-fitted, the steering is entirely unassisted and the windows require a minor work-out to operate. It appears to start well too, which is nice.

It’s not all good news though. Naturally, there are some downsides. This car is 23 years old, so isn’t in the first flush of youth. There is quite a bit of rot creeping in all over the body, though thankfully none of it is serious. I’ll have to get the Vactan rust treatment out and deal with it before it does become serious. There are some suspension issues that need resolving as well. Oh, and the rather grim interior needs a deep clean. I need a nice, hot sunny day for that one so I can give the seats a good scrubbing (and know they’ll dry out before I want to drive it again!).

Right. I’m off for a lie down. Polishing cars is hard work! (I still haven’t done the roof…)

One thought on “Did I get what I want?”