The Golf was pretty dirty when I got it, which is fair enough as the BX was hardly spotless either (though I had at least removed most of the bark/chippings from when it was log hauling).

The seats were particularly grim and being light grey, very much showed it. 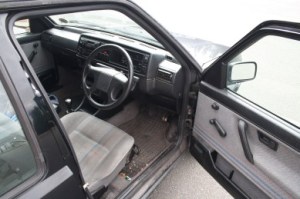 Golf was a mucky pup

I set about reviving them with soapy water. This improved the rear seat and door trims, but pretty much failed to shift the oily muck on the front seats. To overcome the frustrating lack of reward, I set about trying to repair the rear headlining as it had come somewhat adrift. Pushing it back behind two clips should keep it there for a short while at least.

Today, I had another go. This time, on the recommendation of my good lady wife, I used washing soda. Baking Soda is a milder version and can be effective too, but I decided something a bit more advanced was required. You need to be a bit careful with this stuff as it is pretty alkaline. It’s not entirely good for your skin.

However, it did seem to do a pretty good job. I used a rag to apply the washing soda, then scrubbed with a rag followed by a stiff brush. 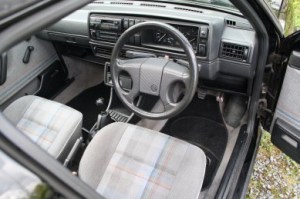 Now, I must admit, I’ve taken a rather better photo second time around, but the improvement is genuine. I’ve also put some different mats in the front and wiped down all of the surfaces. The rear mats are still what came with the car as they’re genuine VW items.

All in all, the Golf is looking much nicer. Whether I can keep it that way remains to be seen! I’m now hoping the seats dry tonight as I’m going to a show tomorrow and had planned to take the Golf…