The last car built in Luton

Luton was once the home of Vauxhall, experiencing its best years before the consolidation of parent company General Motor’s European operations. From the start of the early 1970s, Vauxhall would lose out to German in-house rival Opel first losing design input, then losing car production at Luton altogether (though Vivaro vans are still produced there today – a joint project with Renault). 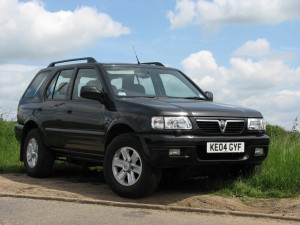 Yes, this is the very last Vauxhall Frontera. The last car built in Luton.

The last Frontera was built in 2004, and it marked the end of passenger car production at Luton (albeit at the former-Bedford factory rather than the main car production plant). Unusually though, it wasn’t an Opel design. In fact, it wasn’t very European at all. The Frontera began life in Japan as the Isuzu Mu (short wheelbase) or Wizard (long wheelbase). General Motors seemed to think that such a name made it unsuitable for Euro tastes, so launched the Vauxhall/Opel Frontera in 1991. The underpinnings were largely from an Isuzu pick-up truck, rebranded as a Bedford then a Vauxhall in the UK and used extensively by The AA.

Petrol engines were Vauxhall’s own 2.0-litre (swb) or 2.4-litre (lwb) but the lwb was also available with the 2.3-litre turbo diesel engine shared with the Carlton. Not one of the best. A facelift didn’t change an awful lot externally, but did replace the cumbersome rear leaf springs with coils. New petrol engines (2.0 and 2.2) were a boost, as was the fitment of Isuzu’s own tough 2.8-litre turbo diesel. It didn’t last long though. For some reason, GM opted to fit the VM 2.5-litre engine from 1996. This was an inferior engine in terms of refinement and reliability – it pops head gaskets (it has four cylinder heads) for fun if you neglect it.

1998 saw further improvements, with a more noticeable restyle, the 2.2-litre petrol carried over but a new 2.2-litre Vauxhall/Opel DTi diesel option and also a 3.2-litre V6 for those with no economy worries. By now though, the competition was moving on and the Frontera was feeling its age.

I know because I’ve driven the very last Frontera ever built and therefore the last car built in Luton.

Driving around on public roads in such a vehicle is really quite odd. No-one has any idea of the significance of it. Why would they? It’s just a black, bland 4×4 with nothing to distinguish its unique history. It is owned and maintained by Vauxhall’s Heritage team at Luton. They often use it to tow other classic Vauxhalls to various locations for displays and the like. This is a working vehicle. Yet when I drove it in 2008, it had less than 4000 miles on the clock.

I enjoyed driving it for a few days and took it as far as the Bromley Pageant of Motoring that year, where no-one paid it any attention, as you’d expect. I felt like frogmarching people up to it saying “Do you know how significant this car is?” But I rather feared I’d be taken away by nice people in white coats. Or at least the security guards.

Yet to drive, it wasn’t that enthralling. Sure, it was very competent in many regards, with fine poise, a quiet engine and good pulling power, but the ride was definitely on the firm side. It felt like the designers had decided that the only way to stop it falling over on bends was to weld the suspension up. On Fenland roads, it was horrific. On the motorway though, it was delightful – with enormous door mirrors making it very easy to keep an eye on traffic behind. Sadly, I didn’t get to put it through its paces off-road, but from what I’ve heard from others, they’re pretty good. After all, there’s a strong separate chassis and a proper low-range gearbox.

That was the problem. Like the Nissan Terrano II, the Frontera just wasn’t soft enough. New cars such as the Nissan X-Trail and the Vauxhall Antara proved that when it comes to 4x4s, the market wants a car that looks a bit chunky – they’re not really interested in actual off-road ability. Therefore the Frontera has another duty to perform. It must represent the end of an era too – the era when soft roaders were still actually good off-road. (Ok, it wasn’t the last. The Nissan Terrano managed to linger on for another few years but was killed off in 2007).

However, my work here is done. I have highlighted what the last passenger car built at Luton was, and it wasn’t the Vauxhall Vectra that most people expect. No, it was instead the Frontera. A car that enjoyed a 13-year production life. A car that deserves more credit than it ever receives. Especially the one I drove.