It’s been a while since the 2CV has appeared on this blog and I apologise for that massive oversight. I’ve been rather busy with other vehicles and work, but that’s not to say that I haven’t been using the 2CV. In fact, the little Tin Snail has been very busy recently, reminding me why I love it.

When it comes to bombing around the roads of rural Wales, I honestly think there isn’t another car I would rather be in. 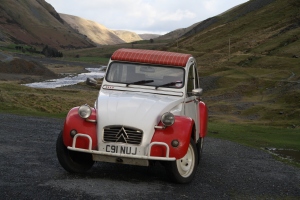 For hurtling around Wales, few things can match a 2CV

That may seem a bold statement, but there’s a reason for it. For a start, much as I love TVRs, it would be left for dead by the 2CV on some of the twisty, trecherous mountain roads around here. It simply doesn’t have the ground clearance and with bends coming at you like a herd of demented cattle, there are few opportunities to exploit the power. You might as well have a mere 29bhp that allows you to keep your foot down.

So, with undulating roads, perhaps a 4×4 would be useful? Well, not really. 4x4s are big, bulky and generally don’t handle as well as smaller cars. If I was in one of those, I’d have to be seriously worried about meeting another car. The 2CV is skinny enough to nip past most things.

A modern supermini then. They’re nippy things aren’t they? Well, no. They’re heavy with city-friendly and therefore lifeless steering. Oh, and huge blind spots. I’m here to appreciate the view, so it’s roof back in the 2CV, which makes it easier to keep an eye on kites and the like. Well, until I got too cold…

Mix in the 2CV’s keen steering, sharp brakes and fabulous all-independent suspension and you’ve got an exceedingly entertaining machine that’s also very comfortable. Also, it took in a forestry commission lane (to a legit car park, don’t just go heading off down random lanes) and transported a household door. The 2CV may not be brilliant at everything, but it’s bloody good at a lot of things.