Project Budget 4×4: Modify or not modify?

I had a jaunt yesterday along the Golf Links green lane, that runs alongside the fabulously scenic mountain road from Rhayader to Cwmystwyth. I’d tackled it several times previously in both my Land Rover and Range Rover. It has a couple of challenging rock climbs, but I was feeling confident about the Maverick’s abilities – and I was not mistaken.

As the picture shows though, there’s no getting away from the fact that there isn’t really enough axle articulation. The right rear wheel is barely in contact with the ground. To be fair, this isn’t the handicap you might assume, as the limited slip differential will always ensure that the one wheel that does have grip will receive power, but a little more flexibility has to be a good thing. Doesn’t it?

That leaves me pondering whether I should begin the modifications. Already, the lack of ground clearance is becoming a bit of an issue. With independent front suspension, there’s always going to be a low ‘belly’ between the front wheels. Thankfully, there’s a hardy, reinforced plate beneath the engine and front differential, but I’d still rather not scrape my way along rutted lanes. As it happens, I suggest a lot of Pajeros had been through previously, so some sections had been flattened! 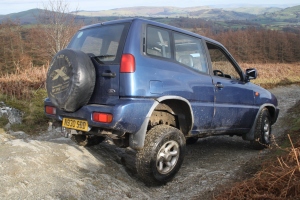 Check out the dangle angle. But should it be modified?

Raising the front end is not difficult. It’s a question of adjusting the torsion bars. Pretty easy. It’s also quite easy to raise the rear end by fitting long-wheelbase springs. A pal on the Nissan 4×4 Owners forum has offered me a pair of long-travel shock absorbers and there’s also the distinct possibility of removing the rear anti-roll bar. With these modifications, the rear end should have vastly more suspension travel and a lot more flexibility.

The problem is, I really like pushing a standard vehicle to its limits. I get very wary of those who feel the need to bolt huge lumps of metal to their 4x4s and the obligatory row of spotlamps above the windscreen. I’m also very aware that the general public takes a very dim view of such modified machines when they see them tearing around the countryside. A pretty, metallic blue, bog-standard Maverick doesn’t seem to garner frowns in quite the same way.

That’s not to say that the suspension modifications will make the car look vastly different – they won’t bar a slight rise of ride height. But the question is, where do you stop? And would it be a waste of time? My Maverick will never be the best off-roader in the world. The petrol engine lacks that lugging torque and the low ratio gearing (allied to poor engine braking – another petrol weakness) mean that there’s always a lack of control at very low speeds.

I shall give this question some more thought over the coming weeks.