As you may recall from an earlier post, the BX had gamely struggled to Derbyshire and back to collect some seats and doors – none of which have got even close to being actually fitted to the car yet. That’s ok. I”ve been enjoying the fact that the BX works and have actually been using it for driving about. Well, I was… 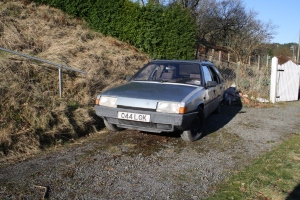 Sitting pretty, but not actually working!

The first problem is water ingress. It’s absolutely pouring in somewhere in the back (well, the front too to a lesser extent) and is pooling in the rear footwell. Sadly I discovered this after the rear seat had been folded for several weeks – the rear seat base then acted like a sponge and soaked up the icky water. Mould is everywhere and I’m feeling a bit disheartened. I shall have to go leak checking and I urgently desire the return of my garage! (still full of building materials although much less so than it was).

I’m sort of used  to leaky vehicles though. The Mini and 2CV are both as water-tight as a tea bag. Thing is, it’s easy to remove the carpet/mat in that pair so the water isn’t held against the floor. Not so the BX, though the carpet is so full of holes that it ideally needs replacing anyway.

The second and rather more serious issue is that the BX isn’t currently working at all. For some time I’ve felt that there’s probably an air leak in the fuel system as it feels down on power. Now though, it’s so bad that there’s no chance of starting it unless you do a LOT of priming beforehand. After a struggle lasting the best part of an hour, I eventually got it to run the other day. Most people would consider this less than ideal.

I need to rig up some fuel pipe to allow me to gradually bypass different bits of the fuel system. I’ve been meaning to do it for ages, but I guess my hand has been forced now. Thankfully my back injury is easing after wrenching it while fixing the Maverick’s brakes. It’s a good job that my flexible working hours allow plenty of tinkering time and hopefully I’ll get the garage back soon, so I can tinker whatever the weather.