With the BX home, I could crack on with the most important jobs. The new radiator was fitted and I managed to free off the reluctant rear seat belts. Other than that, I thought she stood a pretty good chance of passing an MOT, though not being a tester myself, you never know what might be discovered…

As she sat on the ramp and I got my first proper look at the underside, it was pleasing to see how solid she was. There was a touch of softness in the sill – not near anything critical thankfully – but it’s the nearside sill, which has a ruddy great dent in it anyway. It will be replaced at some point. However, the tester spotted what looks like a serious leak from the water pump. I’d spotted this myself at home and had hoped it was something else. 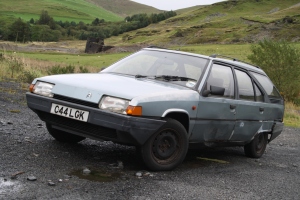 It may be battered and bruised, but the BX is now road legal!

That’s not a real biggy – if you’re changing the timing belt, it’s sensible to fit a new water pump at the same time anyway. If the pump seizes, the belt will rip and the valves of the engine will meet the pistons. Bad news indeed. Parts are on order so look forward to a report on how the change went.

Amazingly though, I got my MOT pass! Or rather the car did. Yes, she looks dreadful but as I thought, she’s actually a good, solid car beneath all the dents. As she’d been in regular use before being stored (and stored pretty well) she feels ready to go.

I’m under no illusion that this project is a long way from over. There is considerable expenditure on bodywork to occur at some point, and the to do list remains sizeable. The priority, as ever, is to get her in regular use and hopefully tackle some of the major bodywork projects next year.