Not all that long ago, I repeated my assertion that I dislike sports cars. Generally, this is true but, just as you may have thought you were certain you didn’t like the ginger one in Girls Aloud, every now and then you’re reminded that your previous certainty may have been slightly suspect.

The ginger-one-in-Girls-Aloud carwise for me is the TVR Chimaera. It’s everything I dislike about sports cars. It’s a proper pose-mobile, it’s stupendously, unnecessarily quick and clambering aboard is like trying to get into one of those mummy-style sleeping bags without undoing the zip. But Peter Wheeler, who was TVR’s boss when the Chimaera was current, was a savvy old player. He even managed to build a sports car that people who don’t like sports cars want to own. 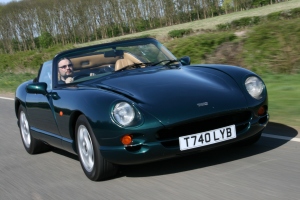 I hate sports cars. See how unhappy I look

Look at the picture above,  taken in 2010. I’m trying to look grumpy because I hate sports cars. The problem is, I was having a whale of a time. I enjoyed temporary ownership of this TVR for 24 hours and every time I tried to clamber out of it to do the normal sorts of things like eat and sleep, I just wanted to get back in and listen to that thundering V8 a little bit more. The swooping lines are delicious. The hand-crafted interior is just lovely. The fact you press a switch under the mirror (Citroen CX mirrors no less) to open the doors is stupidly, boyishly silly. Grown men love that. 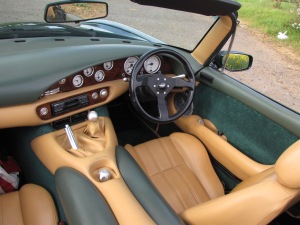 A bold colour choice, but I love it

Every element of this car makes you feel special. Yet under the skin, it’s simplicity itself. Electrical annoyances are very few and far between. No traction control, no airbags, just a powerful engine and a well-sorted chassis. It’s the engine that astonishes though. I can only assume that the noise and the acceleration invoke some of the excitement of being chased by an angry lion. It’s stupidly addictive. In the same way as poking a sleeping lion with a stick. You think ‘life is interesting enough. I can just potter through life and enjoy simple pleasures.’ But the desire to pick up that stick soon resurfaces, and you find yourself screaming towards the horizon at a slightly-terrifying rate of knots once more.

Annoyingly, a TVR Chimaera 450 gets from 0-60mph in just 4.6 seconds, so actually exploiting its 285bhp on public roads can be intensely frustrating. I had a lot of fun, but I didn’t get anywhere near its 158mph top speed. Which does reinforce my initial hatred of sports cars – it’s very hard to enjoy them to their full potential. I considered this dilemma when I returned home and parked the TVR in front of my Citroen 2CV, brown Renault 21 and ‘colourful’ Bedford CF camper. 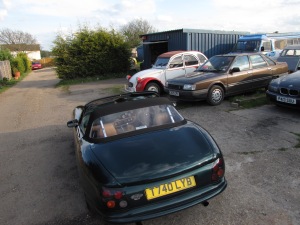 TVR was fun, but so were these old clunkers

The next day, I returned the fearsome TVR to a dealer and reclaimed my 71bhp Citroen BX diesel. I must admit, it did feel a bit slow, but it was like donning a pair of slippers after a long day on your feet in horrible, posh shoes. Rather lovely actually, and very comfortable. I had a lot of fun in that TVR, but I’m still not sure I’d actually want to own one. I’m convinced that at some point, the lion would catch me up, and I’d become dinner.