I don’t know why I bother sometimes. I mean, the 2CV is about a low-tech as cars get. There’s no distributor, no radiator, no water pump, no cambelt, no brake servo, no power assisted steering, no EBD, ABS, ESP, SIPS, no electronic brains. Simple. So why do I keep trying to make it more complicated?

The idiocy began in 2003 when I fitted 123 electronic ignition to the Tin Snail, in a bid to overcome poor running due to a worn points cam and because points are a bit of a faff really aren’t they? To be fair, it did the trick, but problems weren’t far away. First, the car developed a starting fault because 123 is more power hungry than points. I had to replace the battery to overcome that one.

Ok, so that was about all that went wrong for 40,000 miles, but then starting problems struck again. I binned the unit and fitted a DG Ignition – a rather blatant copy. That lasted even less time, causing problems when I was on a 3500 mile trip all over mainland Britain. I returned to points, aided by a box of tricks from Maplin that effectively takes the high voltage power away from the points. Lovely.

The next unnecessary modern gadgets were headlamp relays. My 2CV has had halogen headlamp bulbs fitted since I bought it (I’ve never had to replace one in almost 100,000 miles!) which can cause the headlamp switch to get warm. The wise option, according to most, is to fit headlamp relays. I did this some weeks ago, having been meaning to do it for some years. After all, taking the strain off the wiring loom and switches has to be a good move doesn’t it? 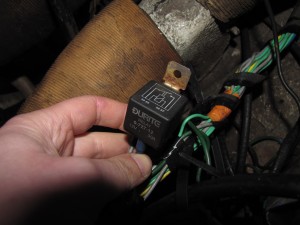 Apparently not. I was driving home in darkest Wales, went to put main beam on and got nothing but darkness. Quite alarming as I was doing 40mph at the time! Thankfully, the headlamps did continue to work but one of my new relays is broken already. If I’d not fitted it, I wouldn’t have had a problem.

It all leaves me wondering whether sometimes it isn’t just best to leave things as the manufacturer intended. The big test for this theory might be the electric cooling fan fitted to the Scimitar…