Enough with all this 4×4 talk. It has distracted me from the shed of dread. The BX hasn’t had an awful lot of use over the winter. It started running really badly, and the power steering became all intermittent with its assisting. Believe me, this makes cornering far more interesting than it should be!

The running issues seem to have resolved themselves, though she’s still down on power. The power steering seems to have been remedied by changing the LHM and cleaning the filters. This is the lifeblood of the BX, so this is rather like refreshing the blood and clearing out the arteries. Seems to have done the trick, though some minor hydraulic issues remain. 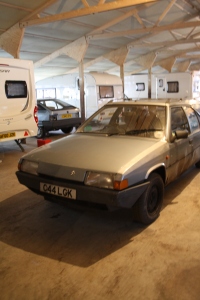 The shambolic BX visits the car that donated its doors

I needed to get to Derbyshire to collect some replacement doors and seats for the BX. I was worried about how I’d get there, but a long run the weekend before departure renewed my faith in the BX. Yes, it has its issues, but surely it wouldn’t let me down?

Come the morning of departure and she let me down. The driver’s door latch froze open, so I couldn’t close the door. I didn’t really fancy trying to strip the mechanism down if it was cold enough to do that, so I decided to take my Ford Maverick. Mistake. While this at least got me off the driveway, after a few miles, it began misfiring and the brakes started making horrible noises. Back home I went.

By now, the BX lock had unfrozen, so I decided to go in this after all, albeit now 2hrs later than planned. That was largely due to the need to de-ice the inside. Once free of ice, I was away. The power thing isn’t too much of a problem. Sure, acceleration is laughably slow, but then even a healthy 1.9 diesel BX can be embarrassed by modern turbo diesels. It didn’t want to pull beyond 3000rpm really, but that’s ok, as there’s a good spread of torque beneath this. Progress was still swift (or as swift as it can be on truck and tractor-heavy trunk roads in Wales) and when we eventually reached Shrewsbury and the novelty of dual carriageway, the BX just about managed to clock 70mph.

I was bloody freezing though and a quick under-bonnet inspection revealed a top hose that was very much not warm. Looks like a new thermostat is needed then. At least the big climb out of Shrewsbury on the A5 got some heat into the engine – and the interior! My chilly state was not aided by door and window seals which are absolutely knackered. Ventilation was not an issue.

Yet despite being far from healthy, the BX plodded on. The ride was still comfortable, the handling still excellent and the brakes absolutely superb. Few things stop like a hydraulic Citroen. Sadly, the impressive brakes were also creating a rather irritating chirrup at speed. I suspect one of the front calipers is binding, just enough to cause a squeak, but happily not enough to cause massive heat build up. Seized calipers can be dangerous.

I arrived in Derbyshire at 2pm, five hours after I first attempted to leave the house. The capacious rear of the BX easily swallowed up a rear seat, two front seats and three doors gifted by a kindly fellow BX Club member. He’ll be putting better doors on his own Mk1 project. After (non)quality nosh from a greasy spoon (which was perfect to be honest!) I set off homeward at about half-past four. The next three hours were pretty tedious, and dark. The only dashboard illumination that actually works on the BX is, usefully, the speedometer – a rotating drum that makes me smile every time I look at it. How Citroen to have the numbers move! The main beam is operated by clicking the left-hand ‘pod’ at the side of the steering wheel. Seems odd, but works very well.

So, the shambolic BX managed another 260 miles and now has more parts to help further its own revival. There’s talk of a trip to Cornwall at some point in the next few months. Wonder if the BX will be the tool for the job…