The brilliant thing about having my own blog is I can prattle on about all sorts of crap cars that magazine editors would tell me are ‘not suitable.’ A case in point is the 1991 Honda Civic I owned a few years ago. It was a 1.4GL and despite being built by the Japanese in the early 1990s, still had a manual choke and twin carburettors. 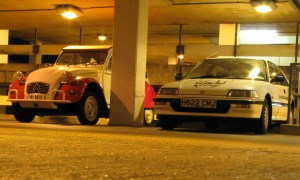 Yet it was astonishing. For all the world, the engine felt like it was fuel injected. I loved it. In typical Honda fashion, it was a revvy little thing, not really waking up until 4000rpm. Insane fun yet I was also rewarded with 40+mpg. Now that’s my kind of car.

I bought it locally when we lived in Cambs, for all of £195. It needed new CV joints, as they clacked like a footballer’s rattle on sharp turns, and had rather serious rot in the left-hand rear wheelarch. I wasn’t going to complain at the price and I clocked up a good few thousand miles in it before flogging it while it still had MOT.

What I really liked about the Civic was that you could still feel the soul of Soichiro Honda in the very design of the thing. It was light, you sat low and the engine screamed like a starving baby. The bonnet was so low that you felt you could use it to stop a trailer rolling away on a hill – you wouldn’t sit on it because it seemed as low as the ground. Wonderful engineering shone out of every pore – from those achingly efficient carburettors to the fresh air vent on the driver’s side of the dashboard – rare to have a fresh air feed on such a modern design, but really rather good.

Naturally, the electric windows and sunroof worked perfectly and the only negative point about the driving experience was over-light, feel-less power steering. Once I fitted budget tyres, this lack of feel became quite an issue on wet roundabouts. It had all the directional stability of a shopping trolley full of bricks. Lesson learnt – don’t buy cheap rubber!

It all went a bit downhill from here for Honda. The Civic gained weight until it became the monstrosity that wears the badge today – relying on quirky looks rather than clever engineering, and a form-before-function mentality that poor Soichiro would never have been able to relate to.

PS – before you ask – yes, I did put the bonnet stripes on it. Me and my wife were the only people in the world (apart from the chav who bought it from me) who thought it looked cool. And don’t ask why I have a picture of it in a car park in Peterborough alongside my 2CV. I’m still struggling to recall exactly how I took two cars to work that day.