Yeah, I might as well admit it. I LOVE crap cars. 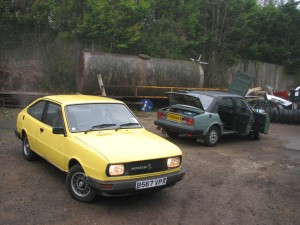 Hmmm. A sight to make our ClassicHub journo go weak at the knees

I realised that I had a problem when a ten-year old me was reading a copy of Auto Express in 1988. I still have the copy now. In it is a budget car group test between the Citroën 2CV, Fiat Panda 750, Yugo 55 and Skoda Estelle. So far, I’ve owned two of the four and deeply want to own the Fiat and Yugo that I haven’t yet sampled.

In a way, I find it frustrating that the Citroën 2CV now has an established classic car following. I think I preferred it when everyone derided them. That was one reason I got into them in the first place. I’ve never paid much heed to the opinions of others – I always have to try things for myself.

And I have too. In fact, my first Skoda really was quite crap. The starter ring gear was worn, so I’d often have to bump start it. In fact, I had to do that having handed over my £150 to buy the thing. The ignition timing was so retarded that sparks would come out of the exhaust at motorway speeds. Exciting! As I wasn’t much of a mechanic at the time, and couldn’t afford to pay for the labour involved in replacing the ring gear, I scrapped it. I still wish I hadn’t. Not only because I only got £30 back for it. I will own another.

I realised that I still had a problem when someone on the Autoshite forum saved an FSO Polonez from being scrapped. Most people would ask “why” but I thought this was brilliant. I’d love to try an FSO Polonez. Were they really so awful? Yes, they probably were but I still want one anyway.

So, why do I like shite? Well, cost is a large part of it. People’s snobby attitudes cost them a lot of money. I rarely if ever pay more than £2000 for a car, and most often, quite a bit less than £1000.  There are a lot of really quite good cars available for less than a grand, and some awful ones too. It doesn’t matter, they’re all an experience.

This is why I need to sell my Land Rover. It’s getting in the way of me continuing to own shite cars. Wonder what I’ll end up with next…