Why the Lexus might be my final petrol car

The economy of the Lexus really doesn’t matter. Well, ok. I’ll qualify that. The economy of any car should not be the main focus. If I believe the hype, I’d buy some modern thing that claims to do 75mpg and surely be quids in, only I wouldn’t be, because I’d probably be paying what the Lexus effectively cost to buy every two months just to own it. It’d also probably be a diesel, and they’re horrible. Especially modern ones.

Lexus may be smooth, but it’s not Volkswagen e-Golf smooth.

I think the XM was a turning point for me. I got so fed up with the horrible diesel soundtrack that I swore I’d never own another. Which is why, a few months later, I bought an Omega turbo diesel. Yeah, ok. I don’t always get it right. That car really was the nail in the coffin for diesel on my driveway. I’ve decided that petrol engines just sound nicer, drink fuel which isn’t half so disgusting to the nose and rev in ways diesels just will not.

But, I like low-down dirty grunt, which petrols aren’t great at – unless they’ve got capacity on their side. V8s are especially good at torque, so while I didn’t really set out to swap the Bluebird for a Lexus, an LS400 has been very much on my wish list for a while now. It’s been far too long since I owned a V8 (early 2011 when I sold my last), and while economy springs to mind for a lot of people, I bet it’ll still be considerably better than my Land Rover 90 V8. That managed to barely have any power and drink fuel at an alarming 15mpg no matter how I drove it. The 120 odd miles I’ve done in the Lexus so far have proved that it is nowhere near that thirsty.

It will be if I enjoy the revs, but so far, extending the slightly-louder pedal in the Lexus has only revealed that it makes the scenery blur worryingly quickly, and suddenly you feel like you’re trying to thread a needle with a jump lead. This much bulk shouldn’t be travelling this quickly on a Welsh B road. So, it’s not difficult to just sit back and enjoy the torque, which allows you to travel decently quickly at no more than 2000rpm. That effortless torque is what I really want.

Which is why I love electric cars, because if there is anything an electric motor does really well, it’s effortless torque. Frankly, a Volkswagen e-Golf makes even a Lexus seem hard work, because as quick as the Lexus can be when it’s in the sweet spot, there’s still a lag while the gearbox works out how to get it there. Internal combustion engines have peak power and torque in one place. Well, actually, the two are often in different places, and you need several gears to try and keep them between the two if you want to get a shift on. An electric motor just accelerates, and it’s lovely. It is, as the lady from Tesla UK once told me, like the best automatic gearbox in the world. Those who’ve followed me for a while know that I’ve been utterly won over by electric for some time now, and it’s only cost that prevents me from buying an EV myself. Silly isn’t it? I can buy a £50,000 luxury car with all the bells and whistles (and 260bhp) for under a grand, but the cheapest electric cars (that you’d actually want to own) are three times that – at least. 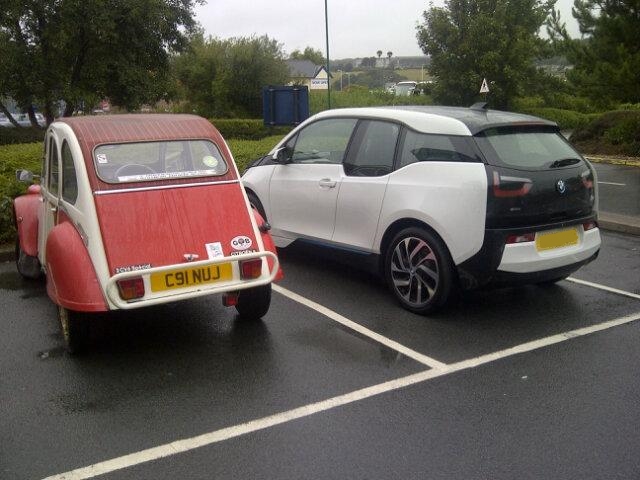 Could this be the future of the HubNut fleet? Possibly. In about 20 years time…

But, having spent several grand on the 2CV, and a huge chunk of cash on the Bluebird more recently, it has occurred to me that it wouldn’t be that hard to save up and buy an EV, maybe next year. Well, I’m not giving up on petrol without enjoying myself first! So, a Lexus it is.

I don’t want an electric car to be green, though that is part of the appeal. I don’t want one to be cool either, because I don’t really understand the concept. Nor do I want one so I can have priority parking at Ikea – I’d rather wear chilli powder contact lenses than go to a huge shop that traps you in a one-way system.

No, the biggest reason I want an electric car is the way they drive. Modern petrol and diesel cars leave me utterly, utterly cold. Electricity excites me. For a start, there’s the ability to generate electricity every time you slow down. Once you’ve experienced this, conventional brakes feel utterly, utterly wasteful. They just make heat! Plus, there’s the efficiency gains. Internal combustion engines also mostly create heat. Less than half of the energy you put in is turned into forward motion.

But really, it’s that seamless power delivery that truly gets me. No turbo lag, no transmission-making-its-mind-up time, no waiting for the engine to hit its sweet spot – just instant, delicious torque.

I wonder how hard it is to convert a Lexus LS400?