Sorry for the radio silence, but getting the latest issue of Retro Japanese magazine to the print was rather more important than getting my Bluebird up and running. Mind you, it was good I was in no rush really!

Having discovered that the cylinder head was in no fit state to go back on, with very bad pitting and erosion around cylinder number four, I took the head down to Hargreaves Engineering in Carmarthen. That’s a bit of a trek, but they were recommended by people I know. Recommendations count for a lot in this game. I was impressed as Adam talked me through the work needed too, as per my previous post.

This week, I finally got to return and pick up the head. As the rain seemed to be keeping off, I decided to take the 2CV again, despite the fact the idle was iffy. 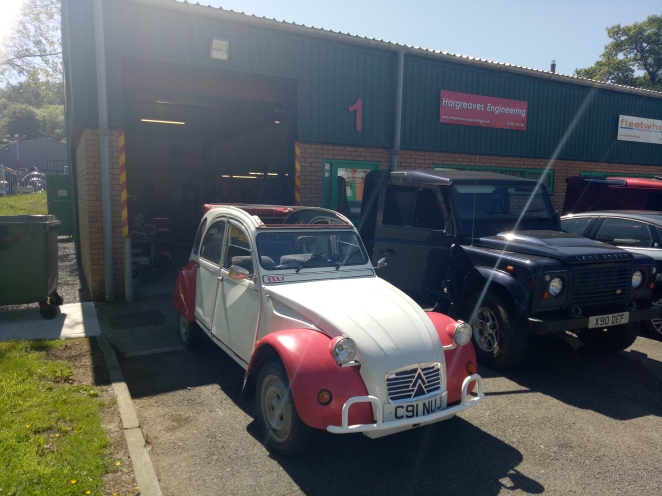 On arrival, the extra work was discussed, payment was made (about £150 worth of work here, the cost of the car keeps going up!) and Adam even cleaned out the idle jet on the 2CV after lending me a spanner to remove it. Very kind! Idle restored, I then drove home.

With the deadline out of the way, I thought I might as well crack on and get the head back in place. The new gasket was dropped on, and that was about as far as I could get until I borrowed a torque wrench (mine is a tiddler that isn’t up to head bolt torques).

Then I discovered that the camshaft timing seemed to be out compared to the belt position. The camshaft pulley only fits in one place, and that place appeared to be three teeth out. Friendly folk have suggested this may be because the belt is still under tension from the ,er, tensioner. Ugh. This wasn’t going to be as quick and easy as I’d hoped.

So, the head is back in place, but I now need to work out how to get the crankshaft pulley off, all so I can remove the lower timing belt cover and access the tensioner bolts. The thought had crossed my mind that I could just drill a hole, but that’s probably silly.

Meanwhile, the Nippa has eaten its brakes, so that’s crying out for attention too. 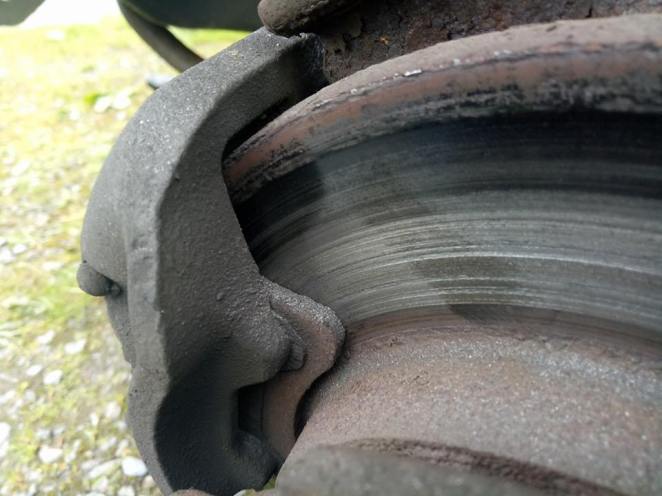 Eesh! Not a nice discovery.

Bit ashamed of that one, though as low pads weren’t an advisory on the MOT, I suspect that one, or perhaps both of the calipers have begun to seize, hastening the demise. Indeed, Rachel told me it felt like they were binding on her most recent trip – you can’t afford binding brakes with only 40bhp! That is metal-on-metal there, hence the glitter and utterly ruined disc. I now need to source new calipers, or at least a rebuild kit. So far, not had much luck.

Which all means I’m not entirely sure when I’ll get the Nissan up and running. The next magazine deadline isn’t a million miles away, so my window of opportunity is small. Annoyingly, the MOT is up on Monday as well. Going well then!