Life has been very busy of late, but things were improved. I sold the Daimler, though it has yet to be collected. However, I’ve received a deposit for it, and I looked forward to having a bit of space on the driveway once more.

Then, I put car things on hold, by going to visit my sister and my new nephew. Ah, a bit of family time. Surely no chance of accidentally buying a car here. I did the thing you’re meant to and held the baby. Awww. But, fond as I am of little Jack, he didn’t seem to do much but sleep. I was left holding a baby. Oh, look. I’ve got one hand free to just have a quick look on Facebook…

Seconds later, I appeared to have bought a Nissan Bluebird T72 saloon, a ‘plush’ 1.6LX. Possibly with head gasket failure. In London. Oh. 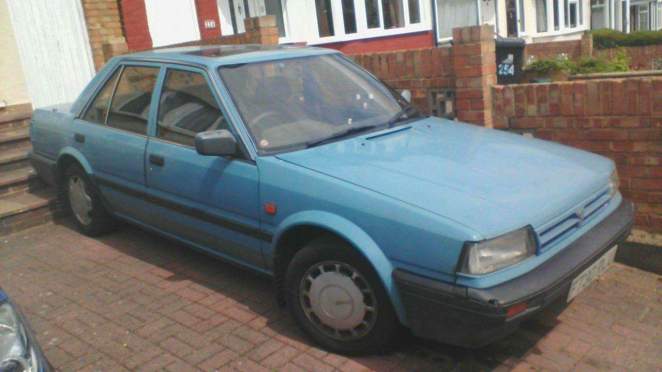 That’s one of the fantastic* quality images that I carefully studied before making the purchase. I must concede, that emotion got the better of me on this one. The 1.6 saloon is a favourite of banger racers. I couldn’t run the risk of it becoming squashed on track. That’s my problem with banger racing – it’s inevitable that viable cars will be bought and raced, and lost forever. Not this one!

So, I ignored the horrendous logistical challenges of getting it home and bought it. Blind. As usual.

Then, I spent some of today plotting how to get it. If the head gasket has failed, then it’s not a good idea to try and drive it over 200 miles. So, a boring ‘collection with a truck’ idea seemed better. There’s even a company near home that could hire me one. Only, it turns out that it failed the MOT today. Bother.

So, I resorted to Shiply, the website where you put up details of your journey, and companies bid for the job. One quickly came in at £1 a mile, so not cheap as it’s over 200 miles. However, having done the job of vehicle delivery myself (before I realised it was a terrible job), I decided that would do nicely. So, I booked it.

The car is being collected at lunchtime tomorrow, which is, coincidentally, the time I’ll be leaving Devon tomorrow. The race is on! Who will get home first? Me or the Bluebird? And how knackered is it? Exciting times again!