There’s actually some very interesting news in the world of modern cars at the moment, so I’ve taken some time to explore.

Let’s start with Tesla. The BBC has reported that Tesla has been cleared of any responsibility for a collision in which the driver of a Model S was killed. It does raise a serious point though, which is that, despite all the clever gizmos fitted to many modern cars (certainly not just Teslas), the driver (for now at least) remains in control, and should deal with any incidents as they arise.

Tesla – ruled only dangerous if you don’t pay attention.

It seems that in this case, a truck drove across the car, which is a scenario most cars seem unable to deal with. Many new cars (including the Qashqai I drove recently) have an in-built emergency brake system, where the car will put the brakes on to avoid a collision. Here’s the thing though. They tend to be radar-based, and have a pretty narrow field of view – they need to or they’d be trying to stop you every time a car approached on the correct side of the road. The message is pretty clear here – do not trust the technology to save you. Pay attention! What this says for the future of truly autonomous cars is that there’s still a long way to go. Which is good news! Autonomous cars sound like a truly terrible idea for those of us who like driving. People who don’t like driving should perhaps consider, er, not driving! Get a lift. Catch the train. Maybe even consider a bus. Then you can check your smartphone without crashing…

In other news, I’ve been pleased to see that Renault has launched a new version of its Zoe electric car, now with a 41kwh battery back. The original Zoe had a 22kwh battery, while the upgraded LEAF I drove last summer boasted 30kwh. Clearly, as EV sales rise, the technology is moving on. The new battery is 15kg heavier, but no larger. That’s pretty remarkable. 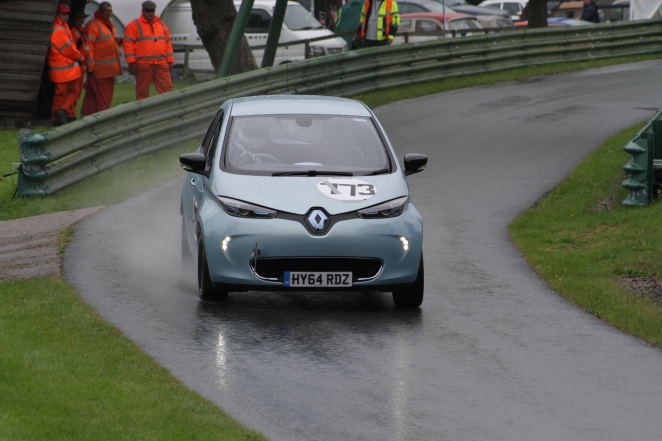 Renault Zoe is to get a greater range. By a long way!

It takes the expected range way beyond 150 miles to maybe 180 in mixed conditions. Realistically, that’s about the same as my 2CV and enough for a full three hours of National Speed Limit single-carriageway routes, or over two hours of motorway. I find this very exciting. Even better, Renault are offering the chance to buy the batteries outright. Now, if you’re buying new, then a battery lease maybe makes sense, especially if you’re leasing the car itself (as 81% of new car buyers apparently do). Second-hand, the picture is much more muddied. You can buy a second-hand Zoe for less than £5000, but it seems very difficult to get a feel for what you’ll be paying in terms of battery lease. It varies depending on annual mileage and some other things. So, £5000 to buy your new car, but then you will be faced with £49 or more a month leasing the battery. The good news is that it protects you against battery failure, as Renault will replace it if it can no longer reach a certain level (70 or 75% it seems). The bad news is that it’s a regular outgoing on a car which otherwise has free road tax and, potentially, very cheap fuel (if you charge at home on a preferable night-time rate). It shoves up your pence per mile, and doesn’t make it look like a favourable option compared to a  50mpg diesel. Or even a 40mpg petrol to be honest. Let’s break for sums.

I should point out that none of these figures include any servicing, with the petrol car needing more – like oil, plugs and filters and things.

So, electric cars don’t necessarily deliver when it comes to sums. Nor do they necessarily deliver an environmental benefit – it does rather depend where the electricity comes from. I don’t much care. I just love the way electric vehicles drive. They just need to get a little bit more affordable but I definitely will own one. Hopefully relatively soon.