Project 2CV – body is back!

Yesterday was the day I’ve been waiting a long time for. Various distractions about paint, and Alan’s need to get a few more jobs out of the way meant it’s taken a while for Elly’s body to be painted. The welding was all finished back in June, but finding a big slot to prepare and paint the body has taken a while.

Firstly, the underside and the floors insider were treated with U-Pol Raptor. This is the stuff used for pick-up bed liners, but it is increasingly common to use it during car restorations. After all, the 2CV has a lot of bare, painted surfaces, and so the floors and inner rear wings have a tough time of it. The Raptor should protect the underside too, effectively acting like a stonechip. Outside, it has been left white, but Alan has covered it in a top coat inside to keep it the same colour as the bodyshell. U-Pol’s Sean Lewis came up to Bradford to demonstrate the process to Alan, though it seems it just sprays on much like any normal paint.

U-Pol Raptor gets applied to the 2CV’s underside.

Then there was a discussion about final paint finish. I’d wanted cellulose, as that’s what it would have been original. However, Alan talked me into giving two-pack another go. I wasn’t very happy with the two-pack used last time, as it seemed to crack very easily on every body seam. Given how flimsy a 2CV bodyshell is, I thought that perhaps this was not the ideal paint.

However, I’ve been talked into giving it another go, so we’ll see how that stacks up long term. One downside is that the car was only painted on Friday, so I really need to wait a few more days for it to harden properly. I should point out, this isn’t the normal way of doing things. Alan would far prefer to let the paint harden, then spend several days giving it a good polish. I’m going to have to do that part myself, as part of my need to keep costs down.

Anyway, to the journey itself. I managed to borrow a lovely car trailer from a friend, so the RAV was tasked with firstly dragging the chassis up to Bradford and Citwins HQ. I must say, the RAV really did surprise me, taking the task in its stride. I mean sure, it struggled a bit up the M62 (the highest motorway summit in the UK), but that only meant dropping to fourth gear. I’d estimate the total weight to have been something like 1200kg hanging off the back of it, so it did really well (towing capacity 1500kg). It certainly felt very stable at all times, so much for looks! I will concede that the RAV doesn’t look up to it at all, with a mere 88″ (2200mm) wheelbase, you’d expect it to be horribly unstable. That said, a Land Rover 90 only has another four inches of wheelbase, and that can tow more than twice as much…

I set off, enjoying the RAV’s abilities, and only slightly infuriated by some pillock in a Range Rover Sport, who pulled straight out in front of me while I was doing my legal top speed of 50mph. Thankfully, the trailer sports rather good brakes. I was not amused. The cockwomble then proceeded to faff about in front of me before making a last-minute decision to turn right. Cheers mate!

If he’s really a spy, he’s a rubbish one.

The route up to Bradford became problematic around Llangollen, because the A483 was closed for a section. This diverted everyone down a small road, with parked cars blocking the flow. I lost over half an hour here. Once past that, the journey was fine though, and I arrived at Citwins at around 2pm, with a brief stop for a fantastic chicken burger at Keelham Farm Shop.  I shall miss those chicken burgers! 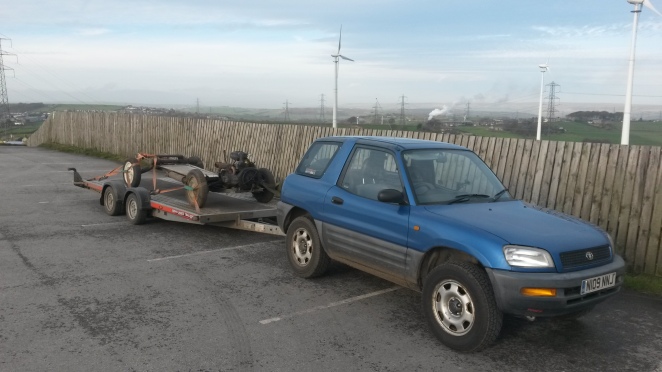 On arrival, we pulled the chassis off the trailer, and then pulled the engine out. That’s going to Ernie Larton for a rebuild, which should extract a few more horses from it. We spotted a missing clutch finger, so it’ll be having a new clutch too. I bought this engine in 1999 out of a scrapyard, and fitted it to my Acadiane at the time (on my 21st birthday!). When the Acad came off the road later that year, the engine found itself in my aunt’s shed for a decade. I’ve no idea what state the clutch is in really, but the engine has done many thousands of miles in the 2CV now with no bother.

With that done, it was time to get the bodyshell ready. That largely meant fitting the doors, which meant fitting the door furniture. With such a tiny tow car, I had no room in the RAV for all of these panels, so the doors were fitted (sans seals) and the bonnet carefully stashed inside the body. Alan also kindly fitted the windscreen for me. Again, the easiest way to transport it was fitted in place. I just then hoped I didn’t kick up any stones on the way back… 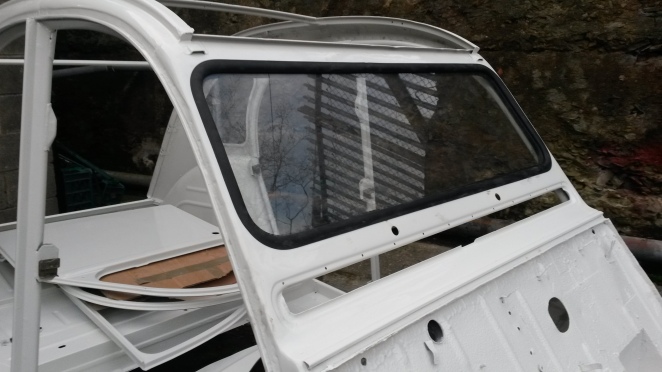 Dropping the body onto the chassis was a nice moment. I had something looking like a 2CV again! With that done, and the RAV filled with what 2CV bits I could get into it (vent panels, bumpers and quite a bit of glass), we could roll the body/chassis onto the trailer, strap it down and I could finally head home. Well, after a cup of tea. It was gone five by now, no point in rushing into rush hour traffic. 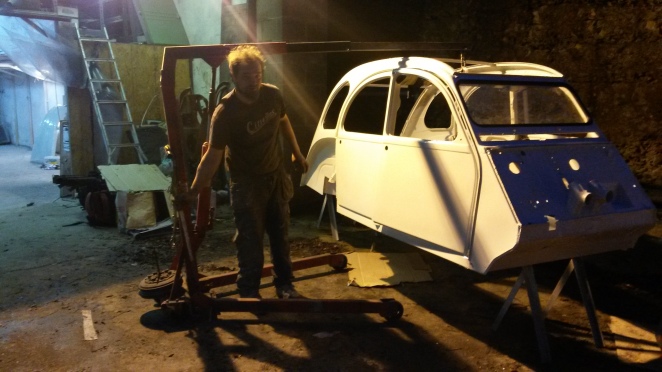 Getting ready to lift the body.

The tea strategy worked well. I grabbed a sausage roll at the farm shop (too late for cooked food sadly) and headed home, encountering very little traffic. Apart from poor lane discipline (all the more frustrating when you cannot use the third lane), the motorway section was pretty stress free too. Fog threatened to make life annoying once back onto Welsh roads, but it mostly cleared.

By Welshpool, I needed to fill up again. This is a thirsty little tow car! I calculated that it was doing about 24mpg towing, which perhaps isn’t that bad. It was certainly having to work hard on hills, but it never really felt like it was struggling. I also grabbed some much-needed fruit. Healthy eating can be a struggle on the road.

The final hour was hard going, but I finally arrived home just after 10pm, a mere 11 hours after I’d set off. I barely managed to stagger into the house, so the 2CV had to spend the night on the trailer. It was removed this morning and installed in the garage, where I set about trying to dry it off with a dry microfibre cloth. I won’t be rushing to get it back on the road though. The engine is now many miles away, and the paint needs a chance to harden up a bit. Rushing makes one rather clumsy, so I’ll take my time. Not too much though, as Elly should be on display at the NEC Restoration Show in March. Cannot wait!

Many, MANY thanks to all those who’ve contributed to this project so far, whether actual donations, parts, advice or just the support from knowing people are actually interested! Great to meet complete strangers at shows who ask how the car is coming along. I appreciate every bit of it. I’m still planning how to say thank you to everyone, but first of all, I need to get it finished!