A couple of weeks ago, I saw Elly’s bodyshell, and it was good. 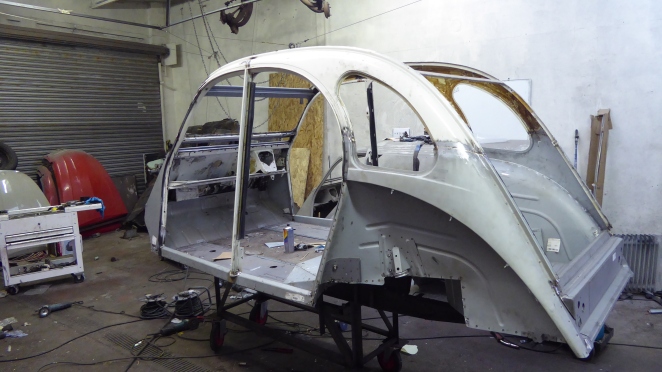 I’m staggered by the good work Alan has done. All that rotten metal is gone and around £1100-worth of panels have been welded in. Factoring in labour, even at a very friendly rate, total expenditure is already running at considerably more than £2000. The scary thing is, this still doesn’t leave me with a finished car! There’s still a lot to do.

In fact, progress will be slowing for a considerable while, as I want the bodyshell painted in cellulose, as per the original, rather than two pack. Had I opted for two pack, then the body could have been finished and painted this week. It isn’t though. It’ll take longer to get a ‘window’ for a cellulose session, and there are quite a few other things to sort out as well.

Primarily, that’s the doors and bonnet. The original bonnet has been deemed scrap, but Alan has sourced a better one. That’ll still need some fettling no doubt, but the doors definitely need some work. So, things are not yet really ready for paint at all. I’m aiming to paint the red bits myself to keep the costs down.

Thankfully, recent editorial work means I’ve been able to add considerably to the project fund myself. I’ve also had some parts donated – thanks John Stenhouse for donating a set of good wheels and tyres. That’s saved me a good £400. There’s still a long way to go though, even if the running gear generally seems good. Plus, my new tow car, the RAV4, has had a timing belt tensioner go down – thankfully it hasn’t taken the timing belt with it, but it has put a dent in my funds.

That’s about it for now. Alan is so busy, and I’m such a pain, that progress will be slow. He has a great many restoration projects to get sorted, some with much more urgent deadlines than mine. I’m certainly not going to have Elly on the road before the end of the summer, so I’m afraid you’ll all have to sit back and wait like I am. At the start of this year, I didn’t think the restoration was going to happen at all, so I’ve no complaints about waiting a bit longer. All I need to do is resist buying something else in the interim. Er…