I was remarkably on-the-ball with my 2015 predicitions. I foresaw both a Dyane and a Perodua in my life, though sadly this is yet another year gone in which I have not owned a Citroen Ami 6. I have at least driven three this year, all very different. Here’s one write up, and below is a video.

But I was way off in 2014, when I predicted a slow year, then got through three or four cars just over the summer months. I certainly kept the DVLA busy!

So, what of 2016? Well, I don’t reckon the XM will be disappearing anytime soon, and the Perodua will certainly be staying around for a while – though its fate is linked to my aircooled Citroens. The Dyane and 2CV both need work. In theory, if either was in perfect working order, we’d have no need of the Perodua as the good Doctor Seabrook of which I am a marital partner will certainly drive the 2CV, and would probably be ok with the Dyane. She certainly does appreciate low-tech engineering and the complete lack of creature comforts is seen as a positive benefit.

So, what of the two A-Series Citroens? Well, the Dyane first. I’m cheating really, as I know I’ve already booked it in for some welding work in March. Before that, I’ve some mechanical work to complete and I reckon I might have it back on the road in February, weather permitting. Having finally committed to spending some actual money on it, I think it’ll have to become a bit of a keeper, at least for a good chunk of 2016.

So, what of the 2CV? Well, this is much more difficult. I can’t really justify spending what little car fund I have on restoring two vehicles, especially when they both fill the same ‘slot’ on the fleet – ie the cheap-to-run fun machine. Plus, can I really say I’ve missed the 2CV since taking it off the road in April? No, not really. Worryingly, I haven’t actually missed the Dyane all that much… I suspect that’s mostly because the weather has been chronically awful and driving in any vehicle has not exactly been much fun. Probably.

Is it too bold to suggest that the XM might stay another year?

Any cars out there catching my eye? Well, only the Citroen Ami 6 really, and it’s very, very hard to justify buying one while I own a 2CV AND a Dyane. So, 2016 will probably be the year in which I still fail to own one. I really have lost my car buying mojo to be honest. The Volvo was fun, but not for very long, and I only went for it because it was free. The idea of spending actual money to buy a car is just not very appealing at all. This could be famous last words…

But I’m not sure it will be. You see, the XM really is ticking so many boxes that everything else suddenly fades into obscurity. It handles really, really well. It goes well enough for me – I still love the torque delivery. It’s comfortable. It’s quiet. It delivers 45-50mpg. It’s also distinctive, even in boring white, and has enough brilliant engineering to keep me interested despite all the boring things it does so well. 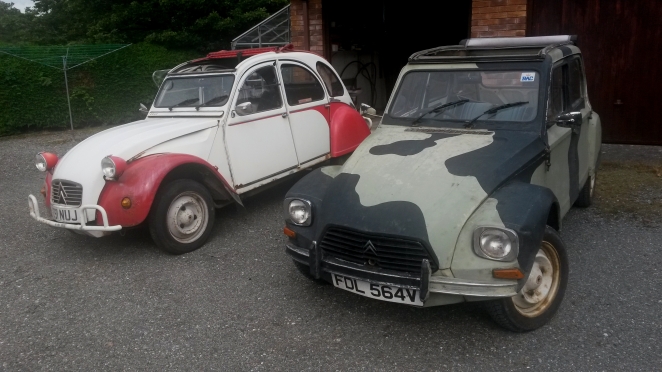 Of course, it isn’t perfect, but I long ago gave up any possibility of finding the perfect car. I adore 2CVs, but must concede that they are both noisy and absolutely horrendous to drive on a windy day – unless the wind is behind you. Likewise, the XM has proved to be a real star, but the turning circle is a bit crap, the visibility is awful and you get the feeling that at any moment, some or all of the electrical systems could just fail. The central locking often does just that.

Could this be the one car that has finally put an end  to my 60-car search for something good enough? Who knows, but I’m going to stick my neck out and predict it’ll still be here next Christmas. That would be its third in my ownership and that (2CV aside) would be a record for me. Let’s see…