I’m a huge fan of oriental engineering. It’s been fascinating to watch first Japan, then South Korea and Malaysia go from producing cars that were a bit rubbish, to cars that rival the best Europe can offer.

The rather-nice, Indian-built, Korean Hyundai i10

Hyundai first hit the UK scene with the Pony in the 1970s. It was a car developed with the help of some former British Leyland folk. It evolved into a fairly decent hatchback by the late 1980s, though dynamically, it was still some way off the pace – not enough to tempt very many from their Astras and Escorts.

With the Atoz city car of 1998, there was a bold attempt to smash into the class that had opened up below the Supermini. It was battling other oriental mighty miniatures such as the Daewoo Matiz, Daihatsu Cuore and Suzuki Alto. The styling was a bit gawky though, and even when it evolved into the Amica, it wasn’t the very height of desirability. It was still all a bit Oriental, in the same way that a 1970s Datsun was exceedingly reliable, but somehow not quite right in the styling department.

That all changed with the i10 of 2007. Suddenly, Hyundai had a supermini that was every bit a match for Ford’s Fiesta. Five-year warranties and excellent reliability meant people really did start taking this South Korean company very seriously indeed. That run has continued and the current i30 manages to look very handsome, especially now the Ford Focus effectively looks like it has melted. 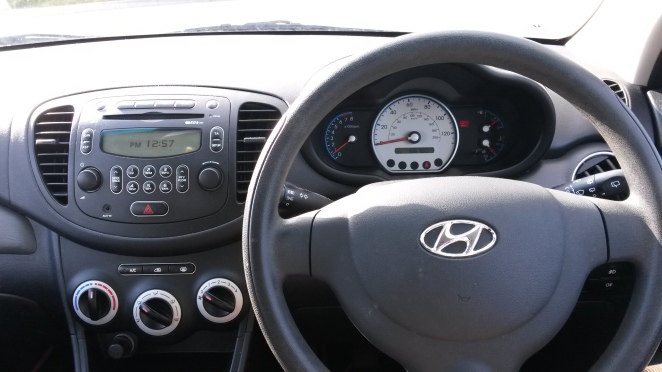 A lot of i10 development was carried out in Europe, and the first generation was built in India – the current one hails from Turkey. Hyundai really is a world player these days.

Behind the wheel, it must be said that the interior plastics are a bit grim, but that’s certainly true of the Fiesta of this era. Like the Ford, the dashboard protrudes noticeably down the middle of the car but the i10 at least leaves plenty of room for your left leg. There’s even a foot rest! Far, far better than the Ford.

The controls are certainly all very logical and straight-forward and once you’re under way, the gearchange is beautifully light, the brakes powerful and the steering nicely weighted – though I did feel it loaded up rather strangely in the bends at first. Possibly because I’m used to a Citroen.

It’s certainly very zingy, with 76bhp on tap. Sure, like most modern multivalve engines, there’s a lack of lower down grunt, but the pleasant gearchange means it isn’t a bind to go hunting through the rev range. It’s certainly very quiet, which means most of what you hear on the move is road noise.

The ride isn’t too bad at all for a small car and while it does jiggle around a little, I reckon it’s actually more compliant than the current model. Certainly, it feels a LOT more pleasant to drive than the Fiesta and reviews of the time suggest it was better than many of its rivals too. Impressive.

Downsides include rear leg room. At 3.5 metres long, it’s not a big car and I would struggle to fit behind the front seat set for my 5’10” frame. The boot is also not entirely generous, though enough for most.

Overall though, it’s a very appealing package. It looks quite smart, with the front end having a particular cheeky appeal. Certainly, this is the starting point of Hyundai becoming a major force in motor manufacturing.