In the run up to the Classic 2CV Racing Club’s annual 24-hour race, Pete Sparrow had promised me another go in his black, BMW-powered 2CV. It’s the one built for the filming of RED2 but since used as a road-legal fun machine. I first drove it in May. Public roads just weren’t the place to explore its considerable potential. 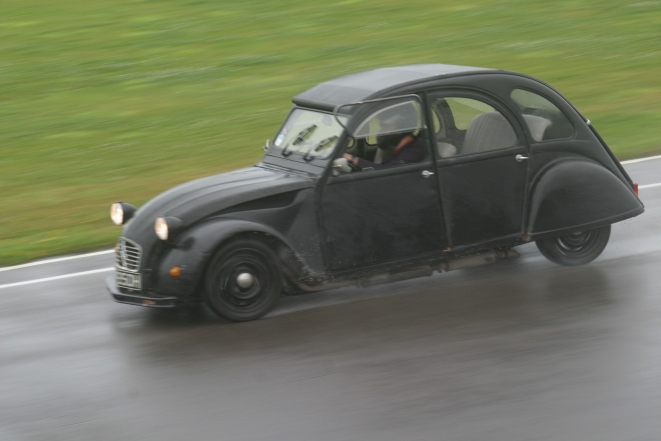 As it happens, Anglesey in August wasn’t the ideal place either. It was absolutely pouring with rain, making it a tricky place to try and drive a 2CV with three times the normal power output. Worse, an organisational mix-up meant three of us would be trying to drive the car in just thirty minutes. That meant just one flying lap. It also meant there just wasn’t time to set up my video camera. I managed to install my phone, but that just recorded my face in extreme close up, with me swearing occasionally as I attempted to get the power down.

But what a rush! I barely managed to utter a word to camera as I drove around the sodden track, enjoying the huge rush of power as the 2CV sprinted towards the next bend. I kept a modern hatchback at bay as I chased down slower cars, passing a Toyota Yaris and my friend in her Citroen Dyane. It’s an astonishing testament to the 2CV that it can cope with such a daft amount of power. When the 2CV was launched, it had NINE bhp. Nine! Yet here was much of that basic engineering coping with 100. The steering is just fabulous, so you know exactly where you’re going to be heading. The pedals are perfect for a spot of heel-and-toe – though I found it hard to adjust to the quick-revving nature of the BMW engine versus a normal 2CV, which has a very heavy flywheel.

Pete Sparrow giving it some welly in his BMW 2CV.

The racers don’t much care for bodyroll, but I absolutely love it. This car is a bit stiffer than standard, but still isn’t afraid to show of its underside when you’re really pushing on – not that I went too crazy, as I knew Pete was meant to be heading off on holiday in this car after the race.

The buzz I felt as I clambered out of the car was amazing. If nothing else, this was a very useful insight into the world of the racing driver. It explains the wide-eyed mania you see when they clamber out of the car after a stint. I’d also gone some way to understanding the challenges of getting around the superb Anglesey Circuit. Getting your line right through the corkscrew, as you descend through a tight left then right hander, is very tricky. How rewarding though, when you gradually feed in the power and feel the car push wider out to the kerb before giving it all you’ve got until the next bend. The ridiculous thing is though, I was here driving the most powerful 2CV that went around the track that weekend. Even the super-modified Belgian overall winner ‘only’ had 70bhp! I would love to try a racer to see how it compares. Less power, but more cornering potential. Unfortunately, with the race just an hour away, no-one seemed to want to lend me their car. Maybe next time!

I’ll conclude by saying if you get a chance to take part in a track session, whether your car has power or not, do so. The 2CV/Dyane road car drivers seemed to be having just as much fun as everyone else. You don’t need power to have fun, but by jingo it’s entertaining!

Thanks to Pete Sparrow of Sparrow Automotive for yet another chance to try this incredible car.

One thought on “Anglesey: Track testing the BMW 2CV”